How do you take away a receiver? Use calls (or techniques) built into combination-man schemes. In Cover 7 (defense I played in with the Redskins), there are multiple opportunities to make calls in the secondary designed to “double” certain route concepts based on the offensive personnel on the field.

Today, I want t focus on the “Slice” call. A two-on-one technique used to limit inside breaking routes (option, dig, slant) and protect vs. the double-move. Let’s go to the chalkboard and break it down. 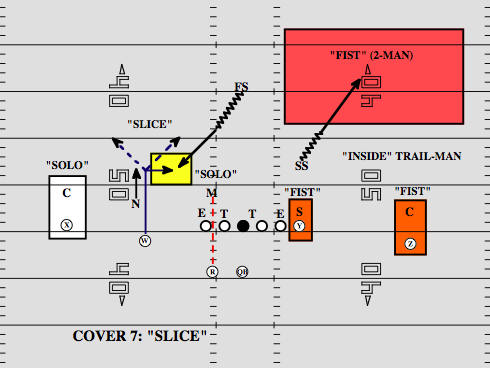 - With the “Slice” call, I am using two DBs (N, FS) to double the slot WR (W). The Nickel will play the first outside cut with the FS playing the first inside cut. A true two-on-one technique.

-What about the double-move? Think of the “Shake” route. The FS will drive on the inside cut with the Nickel now protecting him over the top (playing for the W to get vertical up the field). You want your DBs to be aggressive and sit on that first cut, but you must coach up how to defend the double-move.

-Think of a slot WR such as New England’s Wes Welker that earns his money running the base “option” route in crucial situations. Take that route away and force the QB to look to another receiver to move the sticks.

- I have the open (weak) side CB playing a “Solo” technique (man-to-man with no help). Similar to lining up in Cover 0 (blitz-man), this CB is out on an island all by himself. The same goes for the Mike (M) in coverage vs. the RB (R). Remember, if you want to take away the slot WR, someone will be left playing coverage with no help over the top.

-I have the CB aligned in a press-look. However, to protect yourself vs. the deep ball, you can coach him up to play from an off-man position, "flat-foot" read through the 3-step game and maintain his cushion (distance between DB and WR).

-I have the SS showing down in the front and working to the deep half at the snap of the ball. With both the Sam (S) and the closed (strong) side CB using a “Fist” technique (inside trail-man), this plays just like 2-Man out in the field.

-Landmark drop for the SS is the top of the numbers at 15-18 yards (on the snap). But unlike true Cover 2 (or Tampa 2), the SS must protect the inside seam with the Sam in coverage. There is no help from the Mike Backer in a "Fist" call.

How do you beat a “Slice” call?

-Run the W on the inside vertical seam—and split the double. If both the Nickel and the FS are sitting low and playing for the option route (based on film study), you can catch them with a vertical concept.