What's next for the Senior Bowl prospects?

With the Senior Bowl now complete, the focus is back on the NFL and Super Bowl XLVII. That’s how it should be with the Ravens and 49ers arriving in New Orleans to get ready for Sunday’s matchup.

Play for a ring and everyone is watching. 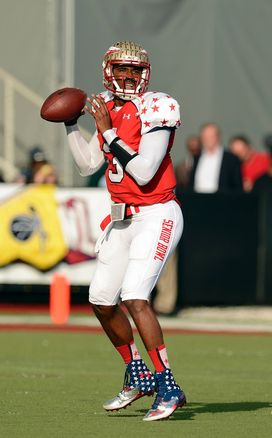 US PRESSWIREE.J. Manuel and the rest of the Senior Bowl prospects will now continue their combine prep after a week in Mobile.

However, those rookie hopefuls we just checked out in Mobile this past week will get back to work.

That’s right. This isn’t time for a vacation. Nope. Hit the weight room, the track and start to prep for the next step in the process: the NFL combine in Indianapolis.

It’s coming at the end of February. And so is the talk of 40 times, the 3-cone drill, short shuttle, vertical jump, broad jump, etc. Mesurables that don’t define a prospect (or what you see on the tape), but still play a major role in the grading/scouting process.

And those drills (along with the static position specific drills) are practiced and perfected over the next month through training. Even down to the steps in the 20-yard short shuttle (5-10-5), these prospects will work daily with repetition, strength training and functional movements to show up and put their talents on display in Indy.

For many of the guys we just watched during Senior Bowl week, they will head back to some of the top training facilities in the country (thanks to their agents paying the bill). Think of IMG Academy or Athletes’ Performance Institute. And there are others that will work with their college strength coach on campus (Iowa strength coach Chris Doyle runs a combine prep program for former Hawkeyes).

I did it myself after graduating from Iowa and playing in the now extinct 2000 Hula Bowl All-Star game in Maui (too many good times on the islands to keep that event going). After starting a training program in Tempe with Athletes' Performance, I flew back to the Phoenix area after the game and was in the weight room on Monday for another week. That was followed by a trip to Iowa City to finish my combine prep with Coach Doyle.

Remember, the All-Star games are the first step. That’s why we talked about footwork, technique, hips, route running ability, power, strength and so on this past week down in Mobile. That stuff matters. That stuff sells when you are putting your skill sets on display.

But it doesn’t stop now. Nah. This is when it gets interesting. Now we get to see who can master the “take home test" of the standard combine drills and show up in Indy ready to wow us with their speed and athletic ability in shorts.

So, while we will listen to stories from Super Bowl media day down in New Orleans or begin to break down tape in anticipation of Sunday’s ball game for the Lombardi Trophy, the prospects that want to be in the league will be training.