Why nothing is guaranteed in the NFL playoffs

The 2002 Green Bay Packers. The best football team I ever played on. Favre, Ahman Green, Driver, Sharper, a young and productive KGB, etc. Swept the Bears (including a blow out win in Champaign, IL on Monday night football), won in the 4th quarter out in San Fran, etc. We headed into Week 17 with a 12-3 record and a shot at wrapping up the No.1 seed—and home field advantage.

Simple, really. Go out to the Meadowlands and take care of business against Chad Pennington and the Jets. Lock up that No.1 seed and relax on the bye week. But, that isn’t how it played out. New York handed it to us and we jumped on that plane and headed back to Green Bay. 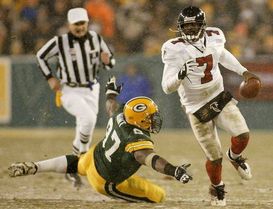 Vick and the Falcons tore us up on Wild Card weekend in a 27-7 win.

Right before we landed, a voice announced that we would play six days later—on Saturday night at Lambeau—against the Atlanta Falcons. A team we had already beat in Week 1 to open the season. They had a young QB named Michael Vick who had given us some issues back in that first meeting, but we felt like we were the better football team. Play our game on defense; let Favre and Ahman put together scoring drives, cover kicks on special teams and advance. Don’t use the Week 17 loss as an excuse—instead use it as an example of what happens in the NFL when you don’t show up at the stadium.

The problem? We didn’t show up—and Vick and the Falcons kicked our ass.

A blocked punt (that I played a major role in), a defense that looked like it was playing on skates in the falling snow and an offense that couldn’t produce points. An eye-opening 27-7 loss. Vick worked us over on defense. Making plays with his arm, breaking contain and proving that he was the best overall athlete on the field. And I will tell you that playing the free safety position vs. Vick when he breaks into the open field (on snow covered grass) is a nightmare.

The first home playoff loss—ever—for the Green Bay Packers at Lambeau. A team that finished the season with a 12-4 record was now done after the first day of the post season. But that is the NFL. These seasons, these supposed “playoff runs” are so fragile. This isn’t the NBA or the NHL. One loss is all it takes. There is no series here. You play your best football or you sit on the couch the next weekend.

We were supposed to win, advance and start our "run." However, these games on Wild Card weekend are so unpredictable and when you don’t show up—or match the playoff speed of the opposition—you are finished.

What an awful night at Lambeau. And the one I will remember the most of my playing career—because that team has Super Bowl talent.

Check back to the NFP today after the Wild Card matchups for my game notes: analysis, X’s and O’s, and more.