Looking back on the Wild Card wins from the Packers and Texans today, here are five things that stand out from my perspective as we get set for the Sunday playoff schedule tomorrow. 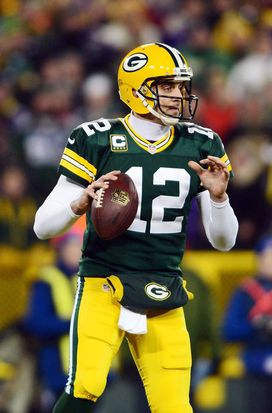 US PRESSWIRERodgers put on a clinic at the end of the first half in the 2-minute drill during the Packers' 24-10 win over the Vikings.

1. Rodgers’ 2-Minute production: That was impressive football from the Packers’ QB at the end of the first half. Rodgers hit Jordy Nelson on the “Dagger” concept (clear out seam-deep dig combo), moved the ball underneath and then came back to Nelson again on deep comeback. And it was that comeback route (off of boot action) that should be shown on teaching tape. Rodgers threw that ball on a rope (to the up field shoulder) and that led to John Kuhn finishing off the drive on an inside run vs. a 2-deep alignment. The execution from Rodgers (and the play calling) in that drive put this game away at the half.

2. Limiting Peterson: The Vikings’ RB still posted 99 yards (on 22 carries), but we didn’t see the explosive runs that have been an issue for the Packers in their previous two matchups. Green Bay was able to maintain leverage on the edge of the defense, hold their gaps and take the proper angles from the secondary. Plus, how many times did we see multiple hats on the ball carrier? I don’t think any defense can shut down A.P. completely, but given the QB situation for Minnesota tonight, the Packers did enough on early down and distance situations to impact the Vikings’ game plan.

3. Foster’s running style: Footwork and vision. That’s what I focus on with Foster. Look at the cutback runs today or the ability to set up a defender in the open field. One-cut, square the pads and work to the second level. With the Bengals’ defense playing some Cover 2 and taking away the deep ball, Houston ran the game plan through Foster (32-140). The Texans will need more production from Matt Schaub to beat the Patriots next week in the Divisional round, but today they leaned on Foster and the run game.

4. Dalton’s deep ball issues: The Bengals’ QB had two deep ball opportunities with A.J. Green today that he missed. Start with the post. Green had Johnathan Joseph beat and created separation back to the middle of the field. However, Dalton left this ball short and allowed Joseph to get back in-phase with the WR to finish the play. Later in the 4th quarter, the QB had Green on quick double move outside of the numbers. This should have been six points with the FS breaking late from the middle of the field, but Dalton overthrew the route. Can't miss on these two plays and expect to advance.

5. Joe Webb’s inexperience: Webb played like a QB that lacked experience. Look at the shaky footwork, his inability to make quick decisions with the ball or his lack of touch down the field. The Read Option was a nice addition to the game plan early with Christian Ponder out, but the Vikings struggled because Webb couldn’t make enough plays from the pocket. To beat Green Bay, you need to score points and convert 3rd down situations. That didn’t happen with Webb tonight.