Click here for my notes from Saturday's Wild Card matchups.

The Seahawks and Ravens got the wins today in the Wild Card matchups to advance. Let's breakdown some notes and take a quick look ahead to next weekend's Divisional games. 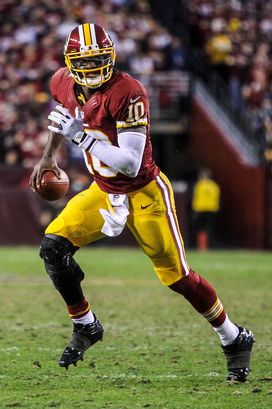 US PRESSWIREShould the Redskins have pulled RG3 before he went down with a knee injury?

RG3’s injury: Should Mike Shanahan have pulled the rookie QB early in today’s ball game? This is a good discussion to have, because the player is never going to take himself out of a game. Not in pro sports. We have to understand the pro mentality when it comes to injuries: push through, play in pain and deal with the consequences after. But who is protecting the player himself? That’s the key. We could all see that Griffin was struggling to move, plant in the pocket and protect the knee. Plus, when he did go down, his knee lacked any sort of stability as it gave out. Just based on a pure football and production standpoint, I would have gone to backup Kirk Cousins to get some rhythm and flow to the offense. The Redskins struggled to run their scheme with Griffin's lack of mobility. But in terms of the larger discussion, there has to be some accountability from the sidelines when it comes to the health of the player. Remember, these guys are too competitive and too proud to duck out of a game (especially on the playoff stage).

Marshawn Lynch’s production: Impressive football player. If you were to breakdown Lynch’s game, where would you start? He can run out of multiple schemes (2-Back power game, Read Option, inside zone, etc.), press the edge of the defense, work inside of the tackles and use vision in the open field to beat up defensive secondaries. In the Wild Card win over the Redskins today, the Seahawks’ RB rushed for 132-yards and a TD (on 20 carries). Those are big numbers. And I love the fact that he will finish runs. Look at the pad level on contact. That’s what you want in a No.1 back.

Boldin’s impact: Here’s the thing on the Ravens' WR: he isn’t going to win with straight-line speed. That’s not his game. However, if you watched the WR today, he can win at the point of attack and within the route stem. Go back to the TD catch (play the ball at the highest point, finish strong) or the deep ball on the quick double-move (created separation). The Ravens generated explosive gains on offense today and Boldin (5-145-1TD) was a major part of that because he made plays for Joe Flacco.

Russell Wilson gets a playoff win: The rookie had the one miss on the deep seam route, but looking at this entire ball game, you had to like what Wilson did in his first playoff start. I know he can run, break contain and make some plays on the Read Option scheme. But I’m more focused on the deep out cuts or the sideline throws that have to be put on the up field shoulder away from the defender.

Ravens’ pass rush: Why not send overload pressure, use zone blitz schemes and even play some Cover 0 (man pressure with no safety help) vs. this Colts’ O-Line? This was matchup Baltimore could exploit today and I like the idea of using multiple blitz schemes. This defense did allow Andrew Luck and the Colts to move the ball, but they made the plays in red zone situations. That sells in the playoffs. I don’t know if having Ray Lewis back in the huddle was the key, but this unit played a much better brand of football today.

A quick look ahead to the Divisional Playoffs…

Ravens at Broncos… If you are going to blitz Manning, then you have to win in the backend. That’s what I’m looking at in this game. Can the Ravens matchup to Thomas, Decker and the Broncos’ TEs when they send pressure vs. Manning?

Packers at 49ers… Power O, Lead Open, Counter OF, Wham, etc. The base power run game from the 49ers. The Packers have to win at the point of attack with their defensive front seven, fit up the run and force Colin Kaepernick to challenge the secondary.

Seahawks at Falcons… I can’t wait to see Julio Jones, Roddy White and Tony Gonzalez matchup to the Seahawks’ defensive backs. A physical secondary that wants to compete and play press-coverage vs. legit talent at the skill positions. That’s good football.

Texans at Patriots… Wade Phillips’ game plan has to improve. The Patriots whipped the Texans in that Monday night matchup and its on Phillips to create a game plan that will impact Brady. Big week in the film room for the Texans’ defense.