10 late round sleepers who could surprise: Part I

With the 2013 NFL Draft just days away, the bulk of the media’s focus is on the players that will be drafted in the first round and what teams are expected to select them. However, often the difference between teams that win and those that don’t is determined by their success with late round selections. Over the next two days we take a look at ten prospects that I believe will be late round picks and could develop into quality starting players, below are the first five: 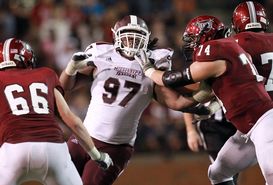 1. Josh Boyd, DT, Mississippi State, Senior (6025, 310 and 5.13): A well-built defensive tackle who looks bigger “on the hoof” than his measured size, Boyd’s combination of size, strength and athleticism is starting caliber. Consistently quick moving at the snap, when Boyd maintains leverage he can lock-out and press offensive lineman with ease. He can either anchor to clog up the inside run or shed the block and make tackle. Although he lacks the explosiveness and premier speed to get backfield penetration to make tackles consistently behind the LOS, he is able to use his quickness of the ball and strength to press the gap to disrupt blocking schemes. Additionally, he has surprising playing speed chasing down ball carriers along the LOS in pursuit. I expect Boyd will be a late round selection, but if he can become more consistent playing with leverage he could develop into a quality starter.

2. Ramon Buchanon, OLB, Miami, Senior (6013, 220 and 4.60 E): An elite athlete, Buchanon’s promising career and high draft status has been dramatically hurt by two knee injuries. A former safety who switched to linebacker and developed into a three down linebacker with great range who excelled chasing down running plays and in pass coverage. If Buchanon returns to his pre-injury form he has the talent to start in the NFL. Five games into the 2011 season, Buchanon tore the ACL in his right knee and then after rehabbing and returning to the field for the start of the 2012 season he re-injured the same knee in Miami’s second game of 2012 and missed the rest of his college career. I doubt that Buchanon will be drafted, but if he can get back to playing at the level he was when he first hurt his knee in 2011 he will become a quality starting linebacker in the NFL.

3. Ray Graham, RB, Pittsburgh, Senior (5091, 199 and 4.80): Returning from a knee injury suffered in 2011, Graham finished his college career on a high note by having the best statistical season in his final season with 1,042 yards, but after running a 4.80 40 at the Combine he is unlikely to be drafted. Instinctive and deceptively quick footed, Graham finds the open hole/crease and gets through it faster than his 40 time would have you expect. His ability to change directions quickly helps him to easily make tacklers miss. While a running back who runs a 4.80 40 is going to have trouble shining in the NFL, if he gets all the way back to his pre-injury form in 2013 (Which will be nearly two years since the injury, which is usually the amount of time a running back needs to get back to 100%) then he could develop into a productive and versatile starting tailback in the NFL.

4. Chris Jacobson, OG, Pittsburgh, Senior (6016, 306 and 5.30 E): An unheralded player, Jacobson impressed us with his play in 2011 before being injured and did it once again in 2012 when he returned from injury. Never one to be confused with a special athlete, Jacobson is a better than average athlete with the flexibility to bend knees to block with base and the quickness to get through the LOS to effectively block on the second level. He reminds me a of Ryan Lilja who came into the NFL as an undrafted free agent out of Kansas State in 2004 and ended up starting over 100 games in his NFL career.

5. Jordan Kovacs, SAF, Michigan, Senior (6000 E, 205 E and 4.58): Although I do not view him as as good of a prospect coming out of school, a number of scouts have told us they feel Kovacs is similar to Jim Leonard (I had a third round grade on Leonard, but only gave Kovacs a late round grade so I do not see the same talent level). Extremely smart and instinctive, Kovacs is quickly able to read and react to the play in front of him and consistently ends up around the ball. Aggressive coming up in run support, Kovacs avoids contact well and can make strong, physical wrap-up tackles on bigger ball carriers when he stays over feet and under control. Not a player I want to match up with slot receivers in man coverage, Kovacs has many of the traits to be productive playing deep in coverage and on special teams.