For many years when football fans heard Chadron State mentioned they immediately thought of former NFL receiver Don Beebe, but in recent years Danny Woodhead has established himself in the NFL and this year offensive linemen Garrett Gilkey is trying to prove he belongs. A three year starter at left tackle at Chadron State, Gilkey has been on the NFL’s radar all through the 2012 season with many scouts making their way to this small school in the middle of Nebraska. Having been to Chadron State to work out and time cornerback Marvin Jackson in the spring of 2003 and 2004 I understand the process of identifying and evaluating small school talent. 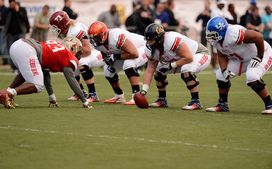 US PRESSWIREChadron State OT Garrett Gilkey lines up at right tackle (73 on helmet) during practice at Senior Bowl.

At Chadron Gilkey displayed the athleticism, playing strength and competitiveness to not just be a good small school player, but rather a dominant one. While his ideal size at 6057 and 314 would work at offensive tackle in the NFL, his shorter arms, 31