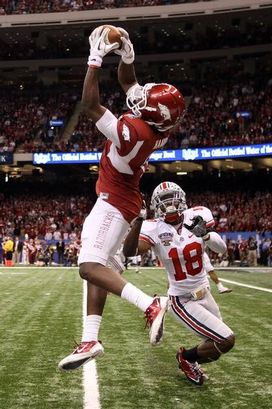 ICONHamilton knows how to adjust to the football.

- Possesses a tall, long frame with good length when asked to range.
- Showcases natural body control and coordination when adjusting to the football.
- Is a natural plucker who is a massive target to throw at when asked to go get the football.
- Isn’t afraid to expose his body in traffic, displays a strong set of hands/wrists and will absorb contact through the play.
- Is a strider who builds speed as he goes and the further down the field he gets the tougher he is to cover.
- Showcases the ability to track the football vertically and has a strider gear when asked to run under the throw.
- Displays the ability to separate on vertical routes, exhibits some wiggle setting up his routes, can put his foot in the ground and use his big frame to gain momentum down the field.
- Exhibits good footwork and body control when asked to run sharply breaking routes as well.
- Understands how to keep his feet under him, be sharp out of his breaks and use his big frame to box out corners.
- Is comfortable playing with a defender in his back pocket on all areas of the field and extending his arms off his frame.
- Can take a lick over the middle and hold onto the football.
- Looks natural playing from the slot and running the seam read.
- Exhibits a physical natural after the catch, uses his stiff-arm well to break tackles and is violent in the open field.
- Has the physical natural when asked to absorb contact over the middle of the field.
- Is a no-non-sense open field runner who makes it a point to get up the field quickly.
- Can become a very good blocker in the NFL, has the size, strength and willingness to get dirty on the outside.

- Isn’t the most explosive of self-starters and takes him a bit to reach top speed and eat up a cushion.
- Will gear down when asked to get out of his breaks and doesn’t show a real explosive first step when trying to separate on sharply breaking routes.
- Lacks an elite initial burst when trying to threaten defenders over the top, needs a couple steps in order to be effective. Isn’t a two stepper.
- Isn’t overly shifty either when asked to create after the catch, can be slow to square defenders up and break an initial tackle.
- There are some concerns about his lateral quickness to shake bigger corners off the line in press coverage in the NFL.

Arkansas wide out Cobi Hamilton possesses a tall, strong build with the length and hand/eye coordination to routinely adjust and pluck the football off his frame. Plus, he knows how to play with a corner in his back pocket and use his strider speed to build momentum and make plays down the field.

Now, he is never going to separate a ton on sharply breaking routes at the next level and initially could struggle some vs. press coverage.

However, he’s a guy who has the skill set to run vertical routes, work the middle of the field and create down the seam. Looks like a potential second/third round type selection who should be able to start as the “Z receiver” and make plays from the slot as well at the next level.