When watching tape of Cal DL Cameron Jordan this summer the first thing that popped into my head was that this guy is a better NFL prospect than Tyson Alualu, who went 10th overall last year. Jordan is a tall, long-armed lineman with natural power in his lower half and the suddenness to shed blocks and be a threat both in the run and pass game. And at 6-4 and nearly 290 pounds he possesses the kind of size to project as a potential five-technique at the next level. 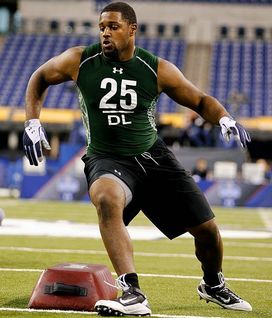 At the five-technique Jordan would have the ability to set the edge on the outside when run at, play off blocks and is capable of making plays off his frame. Plus, he displays some natural pass rusher ability, a good first step and uses his length/hands well to shed from linemen. He loves the swim to the edge and I would like to see him develop more of a consistent rip in order to protect himself, but the natural pass rush ability is most definitely there.

However, what I also love about Jordan’s game is his ability to potentially kick inside and play as a tackle in nickel situations. He comes off the ball low, can threaten gaps off the snap and displays the balance/short area quickness to slip blocks and use his length to keep himself clean. And much like the Steelers use Ziggy Hood at times as the nose --shooting gaps inside in obvious passing situations-- I could also see Jordan doing a lot of the same.

But here is the wildcard… Could Jordan actually stand-up as well and rush from a two-point stance?

Watching Jordan work his way through the Combine’s defensive line drills was a real eye opener. It was Auburn DT Nick Fairley who stole the show. But, Jordan was very fluid and flexible when asked to drop his pad level and cleanly change directions. You could tell there was a lot of natural movement skills to his game and despite playing around 290 pounds, he moved like a much smaller man. Therefore, with more and more teams going with only two, one or at times zero down defensive linemen in order to confuse offenses on 3rd down, could you imagine Jordan standing up, coming off the edge and getting blocked by a running back tying to help out in blitz pick-up? No, it just wouldn’t happen.

Jordan was also asked during his recent pro day workout to take some reps at linebacker during positional drills and it seems like some NFL teams at least are intrigued at the potential of standing the big defensive lineman up from time to time.

Overall, Jordan has the ability to be used all over a defensive front seven. He can play the run well as a typical five-technique on first and second downs and then simply just be able to create miss-matches either at end, nose or possibly standing up vs. an opposing offenses weakest link in pass rushing situations.

Plus, he’s a smart kid who I think would be able to pick up the nuances of all the new positions quickly and because of this potential versatility, we could see him coming off the board higher than his current mid first round status.