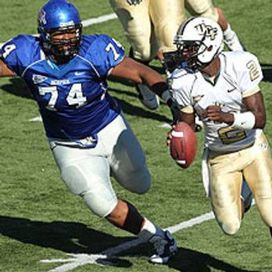 - A tall, well put together 350-pound lineman who carries his weight well and doesn't possess much soft flesh.

- Displays a physically put together lower half as well. Is strong through the base, legs and calves and honestly can play at 350. Has a Haloti Ngata type build.

- Is a monster in the weight room. Puts in the time off the field to get better/stronger.

- Showcases natural bend when sitting into his stance. Keeps his base down well off the football and can gain leverage initially due to pad level.

- Exhibits a "plus" first step for his size. Showcases the ability to get into opposing linemen quickly and keep his pad level down in the process.

- Demonstrates a natural snap through the hips and can simply overwhelm his man with the generated force/power he's' able to create into contact.

- Showcases the ability to keep his pad level down through contact when trying to knife his way into the backfield vs. the run game. With ease fights his way through contact.

- Is a bear to move inside, showcases "plus" natural power, can sit low into contact and with ease hold the point of attack.

- Displays some nimbleness as a pass rusher. Can use his foot quickness to change directions quickly in tight areas and push his way through contact once he gains a step.

- Exhibits a clever/concise spin move where he can slip blocks and get into the backfield in pass rushing situations.

- Demonstrates the power and flexibility to gain leverage and consistently push the pocket inside at the next level.

- Exhibits above average range for his size off his frame and will chase in pursuit.

- Displays good snap awareness for the most part and is routinely one of the first linemen firing off the ball.

- The upside with this guy is tremendous. Has the skill set to anchor a defense inside as a 34 or 43 nose.

- Seems like a hungry kid who is willing to put in the work and develop at his trade.

ICONPoe will get upright once he gains a step.

- Doesn't take a positive first step off the football in either the run or pass game. Needs to do a better job maximizing his first step in order to reset the line of scrimmage, wastes too much motion.

- Needs to do a better job finding the football. Doesn't consistently decipher information quickly and put himself around the action.

- Needs to learn to extend his arms consistently at the point and use his hands better. Too often gets caught playing short armed into contact.

- Is forced to get upright through contact when trying to shed because he doesn't gain leverage and extend his arms well initially into the play.

- When trying to extend his arms initially into contact vs. the run game, he tends to get doubled over more at the waist and doesn't play with the same type of bend, causing him to struggle with balance/power through the play.

- Isn't a real sudden pass rusher. Showcases some nimbleness, but gets caught popping upright through contact when trying to avoid blocks, which limits his power.

- Doesn't possess a great burst once he gains a step when truing to close quickly on the football.

- Showcases the willingness to work in pursuit, but the motor will cool off at times.

- Hasn't ever been real productive because of his lacking technique and ability to consistently find the football. Is a boom or bust kind of player.

Impression: Has a rare physical skill set due to his combination of flexibility, power and get off burst. However, he's still learning the nuances of the position. If he's willing to put in the time, Poe can mature into one of the leagues better interior presences. Nevertheless, because he's raw his floor isn't overly high either.