The Grand Introduction
It can only mean one of two things if you're reading today's column, cover to cover: Either you've reached the semifinal round of the fantasy playoffs (congrats!) ... or you simply can't get enough Brent Musburger or Jimmy 'The Greek' Snyder' clips from yesteryear, via YouTube. There's also one more ancillary reason for tuning in just 10 days before Christmas: You've been a tireless devotee to the Fantasy Philanthropist, forsaking friends, family, office gossip and work-related assignments every Monday and Thursday afternoon ... for which I humbly, happily say, Thank you, and please get a life. HA! Moving on to the next round ...

Week 15 Rules To Live By
1. Ride your studs for Weeks 14-16. At the risk of repeating popular refrains from weeks past, Round 2 of the playoffs is NOT a time for overthinking or experimentation. Unless your star is severely limited by an injury ... owners must assume elite talents will bring their typical A-games to the weekend party (uh, except Ahmad Bradshaw). If you've been riding Percy Harvin (38 catches, 445 yards, 5 TDs since Week 10) as a flex starter for the season's second half ... there's no point in deviating from that savvy stance. If you're convinced that Michael Bush is the Raiders' only hope for victory -- or avoiding 30-point deficits at halftime -- keep throwing him to the wolves (and Lions DT Ndamukong Suh, who's back from a two-game supspension). But if you're thinking about benching Larry Fitzgerald because of his made-for-TV clash with Browns CB Joe Haden ... perhaps you should stop reading and head back to the mall. Bottom line: Stars are stars for a reason; so let's not delude ourselves into thinking that Arian Foster cannot dominate the Panthers on Sunday. OK? 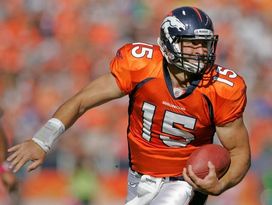 Can Tim Tebow muster up a big performance against a shaky New England defense?

2. Don't assume fantasy greatness for Tim Tebow against the pass-friendly Patriots. New England may have the NFL's worst pass defense, but it would be foolish for Denver to abandon its run-first, run-second strategy in this spotlight game. The Broncos, for all their many warts, are an above-average running team when Tebow's deftly operating the read-option and Willis McGahee isn't hindered by knee, hamstring or ankle injuries; and it's a primary reason for the club rebounding from a 45-10 debacle in Week 8 to post six straight victories. (Not to mention taking America and Twitter Nation by storm.) Unless Tebow has plenty of time for garbage-scoring passes on Sunday, he's still only a lock for 235 total yards and one touchdown. Decent numbers for a QB2.

3. Don't sweat the small stuff, like kickers and defenses. It's real simple here: If you have a top-10 kicker, don't mess with success. And if you have a top-10 defense or one that gets to play Kansas City, Cleveland, Indianapolis, St. Louis or Jacksonville in Weeks 15 or 16 ... therein lies the key to playoff success!

4. Start all productive players from the Ravens, Vikings, Giants, Chargers, Redskins and Saints this weekend. The scheduling gods sometimes smile on fantasyland ... and when that happens, act accordingly. For all-important Week 15, you likely can't go wrong with starting regulars from Ravens-Chargers, Saints-Vikings and Giants-Redskins -- a game where QB Rex Grossman could become a last-minute addition to the 'QB Locks' list for 275 total yards and/or three touchdowns ... and Roy Helu and Brandon Jacobs may hit the 100-yard/1-TD threshold.

5. Think of Andy Dalton and A.J. Green as surefire springboards to the championship round. By all accounts, Dalton (at least one TD pass in 10 straight games) and Green (55 catches, 891 yards, 7 TDs) have exceeded expectations for NFL rookies to this point; in fact, their progress has been nothing short of remarkable. But for the first time since Week 8, we're guaranteeing prolific numbers for the tandem -- against the Rams on Sunday and Cardinals for Week 16. Simply put, if St. Louis couldn't handle Doug Baldwin (7 catches, 93 yards, 1 TD last week), what chance does it have against Green -- a possible Round 4 pick in next year's standard-scoring drafts?

Tale Of The Tape ... Apropos Of Nothing
At the time of this writing (Wednesday morning), I still haven't gotten over two crushing defeats from Round 1 of the playoffs -- the SI.com & Friends and Downriver Celica Supra leagues, where I twice cleared 100 points yet lost to a lower-seeded club that suddenly found religion in Week 14. That isn't to say Cory McCartney and Tony Bahu don't possess championship-caliber rosters, they do; but in standard ESPN leagues, cracking the century mark is usually a means for playoff advancement. 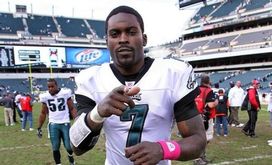 The Philanthropist is looking for a big day from Michael Vick.

Moving on, I have a great semifinals matchup in the 16-team 'Philanthropist #4' league against No. 3 seed John Lorge IV -- a Northwest-based software tycoon who, back in September, brazenly rebuffed my pitch to create/develop a phone app that would dramatically enhance the viewing experience inside a stadium/ballpark for any of the four major sports. (The pitch is near the bottom of this column). So, as you can imagine, knocking off the cold-hearted, practical-minded Lorge would be a nice piece of revenge. (cue evil laugh) Here's our tentative lineups for Week 15:

II. Outside: GPS-style format for marking the location of vehicles in massive stadium lots

V. 'Binoculars' app (w/infrared sensors) for getting a better view of the action (less expensive sets)

VI. Real-Time cameras outside the men's/women's bathrooms ... and at certain concession stands (tracking user/customer lines throughout an event)

VII. Take Detroit's Comerica Park for example: When parents are watching their kids at the famous ferris wheel (within stadium confines), they'll get the closed-circuit game feed that can usually be viewed near the concession stands

YouTube Memory Lane
To conclude our last full Philanthropist column of the season, here are two epic NFL clips from the 1970s, via YouTube:

a. To open the second half, Summerall qualifies the Rams' 19 first-half passes as essentially their total passing output for the entire season (3-plus games at the time), an homage to head coach Chuck Knox's stubborn and highly successful commitment to the running attack (except this game). Incidentally, Knox won five straight NFC West titles in five seasons with the Rams (1973-77) ... but never led Los Angeles (or any other club) to the Super Bowl. Simply put, in the history of decorated coaches who routinely sparked previously moribund programs and won far more games than they lost but didn't make it to Super Sunday ... Knox was Marty Schottenheimer before, uh, Marty Schottenheimer.

b. When promoting the slate of next Sunday's games, Summerall mentions how the Giants will host their inaugural game at the new Meadowlands Stadium. In that turbulent '76 season, New York opened with nine consecutive losses, including a 24-14 defeat in the home opener against Dallas (Week 5).

2. 1978 -- The original broadcast from Earl Campbell's famous bulldozing run against the Rams (and through Isiah Robertson). How awesome was The Tyler Rose's display of tearaway-jersey power and fury? In the countless clips I've seen of George Allen as an announcer ... this is the most excited he's ever been. And for those who don't remember old George, he was always pumped! At the end of the clip, play-by-play icon Vin Scully happily reports that Campbell quickly got a brand-new jersey from the Oilers' equipment staff ... begging these pertinent questions for some 33 years later: How did the Houston staffers know Campbell would require a second #34 at a moment's notice? (It's not like they were playing on wet grass that day.) And who has a squeaky-clean, fresh-smelling alternate jersey on hand for games played indoors? I bet the Bad News Bears didn't have alternate jerseys when they visited the Astrodome one year later.

An award-winning fantasy writer with Sports Illustrated (2008-2010) before joining the National Football Post, Jay Clemons' Fantasy Philanthropist Blog can be found here on Monday and Thursday during the regular season. Clemons can be reached, day or night, via Twitter.