Players whose stock is on the rise:

1. D.J. Hayden, CB, Houston, Senior (5110, 191 and 4.45 E): While scouts had high grades on Hayden during the 2012 season, when he suffered a significant injury to his heart (He tore the vena cava, the main heart artery, and needed heart surgery to save his life) it was widely assumed his football career was over. However, we have heard through NFL personnel that Hayden has been cleared medically by most teams and has made a big climb up draft boards. Not just a fast cornerback, Hayden has great hips, feet and agility which enable him to change directions and adjust to sharp cuts with little effort. As one veteran NFL evaluator told us, Hayden is the most natural of the cornerbacks when it comes to coverage skills and ability to make plays on the ball. Additionally, teams like that Hayden consistently flies up the field and shows no willingness to make hard hits/tackles. For a player that scouts thought was done playing football after his injury, do not be shocked when his name gets called within the first 40 picks on the 2013 NFL Draft. 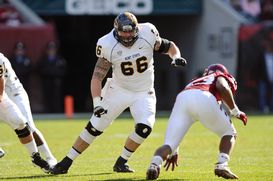 US PRESSWIREKent State's Brian Winters slides out to pass block.

2. Brian Winters, OG, Kent State, Senior (6040, 320 and 5.10): With so many other offensive linemen getting publicity this spring, Winters has slid under the media’s radar, but NFL teams like his talent and upside. Having played offensive tackle in college, Winters’ lack of elite athleticism and shorter than ideal arms (32