2. It's OK to run counter-intelligent moves to your Fantasy Bowl opponent. During the regular season, I can be rather indifferent about my head-to-head competition for a given week -- especially when lording over 11 leagues, plus commissioner duties. (I'm more consumed with Total Points For and Power Rankings.) But during the playoffs, it's imperative to maximize your points, while minimizing the impact of your opponent's star players. For example, if Owner B has Tony Romo at QB ... I highly recommend starting Dez Bryant, Miles Austin, Laurent Robinson or Jason Witten as a savvy reflex. The reasoning is simple: If Romo is going to roll for 3-4 touchdowns against the Eagles, there's a strong chance all the TD passes will go to the above foursome. On a smaller scale, the same holds true for quarterbacks and defenses. If Owner B has Eli Manning as his/her QB1, make every effort to start the Jets D/ST -- just in case Manning tosses three interceptions and one pick-six in Saturday's Big Apple battle.

3. Don't sweat the small stuff, like kickers and defenses. It's real simple here: If you have a top-10 kicker, don't mess with success. And if you have a top-7 defense or one that gets to haunt Kansas City, Cleveland, Indianapolis, St. Louis or Jacksonville in Week 16 ... therein lies the key to playoff success! 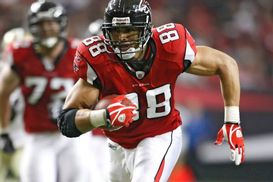 ICONMake sure Tony G is in your starting lineup this weekend. No sense in sitting at this juncture.

Opportunity Knocks
For those seeking redemption from a failed regular season or inexplicable postseason flameout, I offer a chance to join me (and countless friends from the Seattle area) in an established postseason fantasy league -- once the NFL playoff pairings are announced. Please hit me on Twitter in January, if interested.

YouTube Memory Lane
1. 1979 -- <i>Monday Night Football ... Let's rehash one of my favorite chestnuts of the year: Steelers linebacker Jack Lambert unleashes a nasty high-elbow shot on Broncos receiver Haven Moses. Two things make this clip eminently watchable: Howard Cosell shamelessly lampoons Moses for not making a leaping, in-traffic catch of a substandard Craig Morton pass ... and 'Dandy' Don Meredith expresses little sympathy for Moses getting flattened by a future Hall of Famer. If this play had occurred last week, the NFL mini-universe would be up in arms over Lambert not getting flagged for "hitting a defenseless receiver" -- with ESPN subsequently playing the Is Lambert a dirty player? card with Skip Bayless and Stephen A. Smith the following Monday. And yet, in 1979, there were greater safety concerns for Lynn Swann leapfrogging a car, curiously placed near the end zone. What, Three Rivers Stadium didn't have adequate parking then?

2. 1979 -- Seattle fans might want to avert their eyes from this all-time disaster, with the Rams holding the Seahawks to -7 total yards and one first down in a 24-0 rout at The Kingdome. As you may have guessed, the 'minus-7' still stands as the NFL record for Fewest Yards By One Team In A Single Game; remarkably, though, the Seahawks' one first down was never an NFL precedent ... as five teams -- the 1933 Eagles, 1933 Steelers, 1935 Eagles, 1942 Giants and 1966 Broncos -- all went an entire game without gaining 10 yards in 4 downs or less. Ouch! Postscript: Six days prior to the Seahawks' historic meltdown, the franchise garnered a level of never-before-attained fame on Monday Night Football ... by stunning the Falcons on Efren Herrera's fake-kick/go-route reception to set up the winning score -- prompting the awesome Cosell quote: (Head coach) Jack Patera is giving the nation ... a lesson in creative football!

3. 1980 (Oilers-Steelers) -- In the 1979 AFC Championship Game (played on Jan. 6, 1980), Houston's Vernon Perry shocks the black-and-gold Pittsburgh faithful with a 75-yard pick-six off Hall of Famer-to-be Terry Bradshaw. This game marked the zenith of the Oilers' Luv Ya Blue era, highlighted by head coach Bum Phillips, QB Dan Pastorini and Earl Campbell, the Hall of Fame back who rushed for an incredible 6,457 yards and 55 touchdowns in his first four pro seasons (1977-80). From a more historic standpoint, thanks to Mike Renfro's non-scoring touchdown catch in the third quarter -- where all of America could plainly see that Renfro had two feet inbounds in the end zone -- the NFL might have been motivated to experiment with instant replay in the 1980s ... before fully adopting it for modern-day use. Could you imagine the social-media outrage today, if a crucial call in a championship game couldn't be overturned, via instant replay? Let's give a tiny bit of credit to Renfro and NBC announcer Dick Enberg for planting that technologically advanced seed on a cold, blustery day in Steel City. (Cue the disco-themed outro)

Goodbye ... And Good Luck!
Well, here it is ... perhaps the last fantasy football-related paragraph of my lifetime; and as part of that, it's been my sincere pleasure to share unsolicited advice, anecdotal stories and YouTube memories apropos of nothing to the fantasy masses this season. (Hopefully my July-based guarantee of Make The Playoffs ... Or Your Money Back came through, as well.) I would also like to thank the National Football Post powers-that-be -- Andrew Brandt, Jack Bechta, Matt Bowen, and especially Elise Menaker (the omnipresent intern) and Joe Fortenbaugh -- for providing a twice-a-week forum to celebrate the game/hobby that has effectively consumed my life for the last 10 years. I'll leave with five parting words: Don't ever bench Larry Fitzgerald!

Jay Clemons can be reached, day or night, via Twitter.