When looking at the Atlanta roster, the draft needs on the defensive side of the ball have to be addressed. The Falcons did resign DE John Abraham in free agency, but there is room to add some young talent along the D-Line and outside of the numbers at the CB position. Let’s take a look at the prospects that fit in Atlanta. 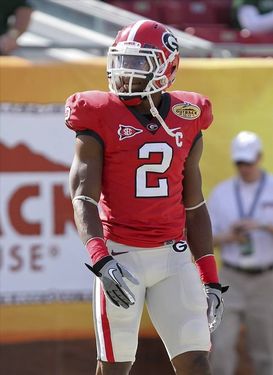 Chase Minnifield CB, Virginia: A talented corner who can bend, re-direct, maintain balance out of his breaks and make plays on the football. However, had a tough go as a senior giving up a lot of plays and having a tough time maintaining balance when trying to locate the ball vs. bigger receivers. A potential starter only.

Andre Branch DE, Clemson: Has a lot of untapped talent. And is the kind of athlete you would expect to mature into a solid three down player in the NFL as a 43 DE.

Ladarius Green TE, UL Lafayette: He's a big slot guy who can make plays down the seam and can release off the line. However, he's not an in-line blocker and doesn't play well in tight areas vs. man. He has tools to be productive in the pass game, but there are limitations and you need to be creative to get the most out of him.

Kevin Koger TE, Michigan: Flashed on tape at times and does have some talent. However, is raw in all areas of the game and looks more like a low round pick/ free agent only who could blossom.

Quenton Saulsberry C, Mississippi State: A solid athlete who does some things well on the move and in pass protection. More of a zone lineman only, but needs to do a better job getting off the snap count on time in order to have a chance of getting drafted. David Snow C, Texas: Isn't an overly powerful in-line guy or elite athlete. But he can bend, is coordinated in both the run and pass game and does a great job shooting his hands inside and sticking to blocks. Looks like a guy who can make a roster and with some improved strength fight for playing time down the line.