The Detroit Lions made a run to the post season in 2011, but they still have some holes to fill in the defensive secondary. With some upgrades also needed along the O-Line, let’s take a look at the prospects that fit Jim Schwart’z club in the NFL Draft. 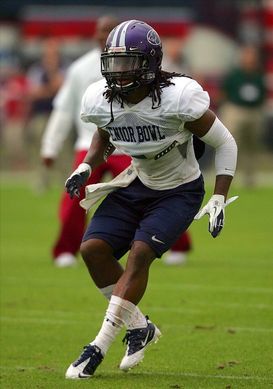 Janoris Jenkins CB, North Alabama: If he can put it all together off the field, he's got the ability to develop into a very good cover man in the NFL. And despite his size, he's going to be a really tough guy to separate from in just about any scheme he plays in.

Mike Adams OT, Ohio State: He's a talented kid with a big frame, long arms and natural movement skills. He can bend and if he can put it all together and continue to improve his footwork he could certainly mature into a starting caliber left tackle in the NFL.

Chandler Jones DE, Syracuse: We love size and length. But we also worry about defensive lineman who play upright, lack a great get off burst and struggle to change directions. I don't see him as a big time pass rusher. But if he improves his pad level he could mature into a potential starting option.

Jack Crawford DE, Penn State: A big, strong defensive end prospect that still has some upside to his game. But won't be able to take that next step until he learns to play with a more consistent pad level. A size prospect worth developing long term.

Bryce Brown RB, Kansas State: Watching him run in Lane Kiffin's zone scheme as a freshman, the guy was an impressive back with a lot of natural talent. He was the number one ranked recruit out of high school, ahead of Trent Richardson in 2009 and no doubt has the skill set to play in the league. The biggest question mark for him going forward is his overall character.

Bobby Rainey RB, Western Kentucky: I think he could get some looks as a situational type back that can be used in space effectively at times. However, despite his production, I think at best he's a later round pick who is going to have a find a niche early on where he can make plays and be dynamic if he hopes to stick on an NFL roster. My guess would be either as a return guy, a situational guy in the pass game or even on kick coverage.