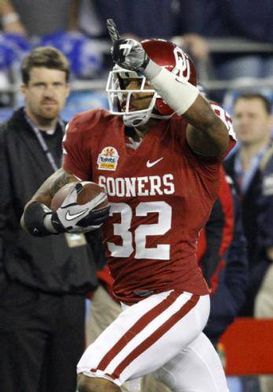 ICONFleming is one of the most underrated corners in the draft.

1. CB Jamell Fleming: Oklahoma (5-11, 191)
He's a balanced, coordinated kid who keeps his feet under him when changing directions and can turn and run. Doesn't give up much separation, knows how to make plays on the football and if he can improve as a tackler looks like a guy who warrants a starting job in the NFL down the line.

2. OLB Travis Lewis: Oklahoma (6-2, 227)
He's a bit undersized and doesn't tackle as well as you would like inside the box. However, he's a good run and hit backer who plays the run well and will be able to make plays vs. the pass game in the NFL. Looks like a day one starter to me as a 43 backer, either on the weak side or possibly in the middle.

3. OT Markus Zusevics: Iowa (6-5, 300)
A "plus" run blocker who more than held his own in the pass game. He quickly gets off the football, generates a snap into contact and improved his pad level into/out of his stance as the year went on. Zusevics looks like a starting caliber offensive lineman -either at guard or tackle- in the NFL with a year or two of seasoning.

4. WR Marvin McNutt: Iowa (6-5, 215)
A tall, long armed receiver who can win off the line and use his big frame to box and go get the football. A big target who looks capable of fighting for a starting role now at the next level.

5. CB Shaun Prater: Iowa (5-11, 185)
Is still developing his feel in zone and needs to add more weight. However, he's smooth, fluid and coordinated in his drop and out of his breaks. Has a chance to start in the NFL, more of a zone corner though.