Is Spencer Ware the next Marion Barber? 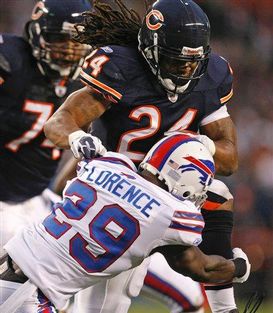 Spencer Ware and Marion Barber have a similar running style.

- Runs angry. Craves contact and plays with a nasty attitude.
- Showcases natural patience at the line of scrimmage when asked to pick his way through contact inside.
- Does a nice job making himself small inside and running through arm tackles.
- Exhibits a solid first step when eating space and pressing the line of scrimmage.
- Builds his momentum quickly and wants to get downhill.
- Does a nice job keeping his base wide when he wants to change directions. Looks natural sinking his hips and cleanly side stepping defenders.
- Runs hard and angry, but has a little wiggle to his game at the line of scrimmage if he needs to make a man miss.
- Is patient setting up blocks toward the edge and using his vision to stick his foot in the ground and get up the field.
- Showcases a good feel in short yardage and goal line situations, runs low, can find small creases and has the natural strength to push the pile.
- Breaks a ton of tackles both at the line of scrimmage and in the open field.
- His running style is very demanding on defenses and they seam to wear down quickly.
- Doesn’t leave many yards on the field.
- Can create his fair share of bigger plays because of his ability to side step/break a tackle at the line and accelerate quickly in space.
- Looks natural plucking the football out of the backfield.
- Squares his frame quickly and is a no non-sense type guy in the open field.
- Lowers his pad level in space and gets north to south quickly.
- Loves to finish runs, routinely overpowers on contact and falls forward.
- Showcases “plus” balance through contact. Is able to absorb hits from defenders when they don’t wrap and routinely keeps legs moving through the play.
- Generates a lot of yards after contact.
- Proved he can carry a heavy workload during the early part of the 2011 season and be a workhorse back.

- Failed a drug test in October causing him to miss the Auburn game.
- Battled his weight throughout the second half of last season and broke down a bit physically. Lost touches because of it.
- Isn’t the most explosive athlete, gets up to speed quickly, but looks more like a 4.55/4.6 athlete in space.
- Can keep his pad level down, but when he accelerates tends to get upright and will expose his frame.
- His running style could cause him to break down sooner rather than later. Looks for contact in the open field.
- Is more smooth than sharp/sudden as a runner. Doesn’t have great make you miss ability in any area of the game. More of a downhill back.

When motivated and his playing weight is in check, LSU RB Spencer Ware has the skill set to start in the NFL, wear down opposing defenses and keep the offense ahead of the chains. He’s never going to be a legit big play threat and his shelf life is going to be shorter than most backs because of his demanding running style.

However, he remind me a lot of former Cowboys running back Marion Barber III and I think he could end up having a similar style career for himself at the next level.