With the NFL Combine now complete and different prospects beginning to see their draft stocks rise and fall, the NFP is pleased to release our second mock draft of the 2011 season. 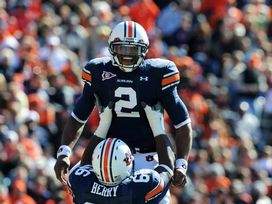 Newton could be the number one overall pick.

1. Carolina Panthers: Cam Newton, QB, Auburn
It’s rare to find a quarterback with Newton’s physical skill set, and in a quarterback- driven league I have a tough time seeing the Panthers go in any other direction other than a signal caller.

2. Denver Broncos: Nick Fairley, DT, Auburn
The Broncos need to continue to add talent to their defensive front and with Fairley added to the mix they instantly have a guy who can not only rush the passer, but he gives them someone they can build their entire defense around in the future.

3. Buffalo Bills: Marcell Dareus, DL, Alabama
No matter what front the Bills want to run in 2011, Dareus will be able to find a home. He’s a thick, strong anchor player who has some natural athleticism and offers significant scheme versatility.

4. Cincinnati Bengals: Julio Jones, WR, Alabama
Size/speed athletes never last long on draft day and after the impressive Combine workout that Jones put on Sunday afternoon, the guy now looks like the first receiver to come off the board.

5. Arizona Cardinals: Da'Quan Bowers, DE, Clemson
With a talent like Bowers still on the board at five, I think the Cardinals just need to look in the direction of the best player available. They have a big need at QB, but with some free agents out there to possibly fill the need, the Cardinals can elect to go defense.

6. Cleveland Browns: A.J. Green, WR, Georgia
Adding a dynamic threat at the receiver position is a must for the Browns this offseason, and despite not having as good a Combine as Julio Jones, I still think Green is going to end up being the best receiver in the class.

7. San Francisco 49ers: Von Miller, OLB, Texas A&M
With no quarterback on the board worthy of the pick, look for the 49ers to try to address their pass rush needs with a guy who knows how to make a living flying off the edge and getting after opposing signal callers.

8. Tennessee Titans: Patrick Peterson, CB, LSU
Defensive back might not be the biggest of needs for the Titans at eight. However, Peterson is the one potential blue-chip prospect left and is a real value at this stage.

9. Dallas Cowboys: Prince Amukamara, CB, Nebraska
Speed rules at the cornerback position and the second that Amukamara ran in the sub-4.4 range he established himself as a potential top-ten pick.

10. Washington Redskins: Cameron Jordan, DL, California
Washington has holes all over, but adding a versatile five-technique who can two-gap on run downs and rush the passer both inside and out in nickel situation is a nice grab at ten.

11. Houston Texans: Robert Quinn, DE, North Carolina
I wouldn’t be shocked to see the Texans reach for a nose tackle here, but Quinn is the one guy who has the potential to mature into one of the league’s better pass rushing 34 OLB’s with some time. Pairing him with Mario Williams off the edge could be scary.

12. Minnesota Vikings: Blaine Gabbert, QB, Missouri
The Vikings have a gaping hole at the QB position and with a signal caller like Gabbert still on the board, he might be too good to pass up.

13. Detroit Lions: Brandon Harris, CB, Miami
Adding talent to the secondary has to be objective number one for the Lions front office. Harris is a fluid, balanced kid with good speed and impressive ball skills. He had a very good combine and in my view will continue to see his draft stock rise throughout the postseason.

14. St. Louis Rams: Aldon Smith, DE, Missouri
Head coach Steve Spagnuolo had a versatile defensive lineman during his days in New York with Justin Tuck and Smith could play a similar role in St. Louis. He possesses a long frame, can continue to add bulk and has the ability to rush both off the edge and from the three-technique in nickel situations.

15. Miami Dolphins: Torrey Smith, WR, Maryland
Smith might be a bit of a reach here. However, the Dolphins need to find a guy who can take the top of a defense and make plays vertically down the field. He’s a bit of a one-trick pony at this stage, but he has the speed to certainly get a look in the middle of the first round.

16. Jacksonville Jaguars: Ryan Mallett, QB, Arkansas
It only takes one team to draft a guy and despite there being some potential character concerns with Mallett off the field, the guy has the arm strength to make all the throws and long term could be an upgrade over David Garrard. 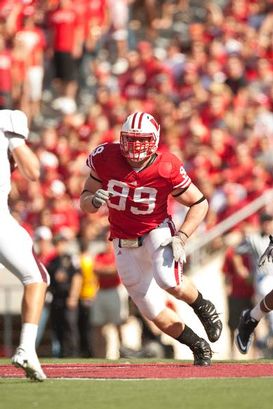 ICONWatt seems like a natural fit in New England.

17. New England Patriots: J.J. Watt, DE, Wisconsin
Watt seems like a perfect fit in the Patriots 34 front. He’s got the length/anchor to set the edge, is a better athlete than given credit for and offers some versatility to play inside in nickel situations as well.

18. San Diego Chargers: Phil Taylor, DL, Baylor
The Chargers have a need for a big body who can anchor either on the inside or out. Taylor is a real talent with good upside and could quickly come in and improve the Chargers front three.

19. New York Giants: Anthony Castonzo, OT, Boston College
The Giants have a need at offensive tackle and I have a tough time seeing them pass on a Boston College product if tackle is the pick.

20. Tampa Bay Buccaneers: Justin Houston, DE, Georgia
Houston in my view is a better fit as a 4-3 down defensive end. He possesses a great first step, can fly off the edge and will force opposing quarterbacks to step up into the teeth of the Bucs talented defensive tackle corps.

22. Indianapolis Colts: Tyron Smith, OT, Southern California
Smith is a gifted athlete who still has a ton of upside to his game. He might need a year or two to a mature, but has the makings of a very good blindside protector in the NFL.

23. Philadelphia Eagles: Nate Solder, OT, Colorado
The Eagles have needs across the offensive line and Solder not only gives them a big, athletic body, but he can play on either the right or left side and can get after it in the run game when need be.

24. New Orleans Saints: Adrian Clayborn, DE, Iowa
Clayborn gives the Saints a versatile three-down player who I can see getting reps both inside and out. 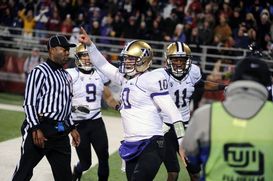 ICONIs Locker now a lock for round one?

25. Seattle Seahawks: Jake Locker, QB, Washington
With a potential homegrown franchise quarterback prospect sitting in the laps of the Seahawks in the later portions of round one, it’s going to be tough to pass on the kid.

27. Atlanta Falcons: Jimmy Smith, CB, Colorado
When asked to press up near the line of scrimmage, Smith is a tough corner to separate from. He would add some much needed physicality to the Falcons secondary on the outside and should be able to come in and play early in his NFL career.

28. New England Patriots: Akeem Ayers, OLB, UCLA
His less than ideal 40 time (4.84) could cause him to fall a bit on draft day. However, the guy has a gifted skill set, plays faster on tape and could be a real find for the Pats at the end of round one.

29. Chicago Bears: Gabe Carimi, OT, Wisconsin
Carimi is a good enough athlete to play on the left side and hold his own in pass protection. However, his bread and butter is as an in-line blocker and will give the Bears some real thump on whatever side they wish to play him.

30. New York Jets: Christian Ballard, DE, Iowa
With needs both at DE and OLB getting an athletic five-technique who can set the edge and make plays off his frame is a good value for the Jets at this stage. Ballard is still learning the position, but the skill set is most definitely there to develop into a good starter.

31. Pittsburgh Steelers: Mike Pouncey, OL, Florida
The Steelers still have holes all across their offensive line and with the success they had with Maurkice this year, his twin brother Mike makes a lot of sense.

32. Green Bay Packers: Jonathan Baldwin, WR, Pittsburgh
With some questions at wide receiver adding a talent like Baldwin is a risk that could end up paying big dividends down the line.