Our latest mock draft of the season.

1. Indianapolis Colts: Stanford QB Andrew Luck
Seems like Luck to the Colts is still all but a lock. 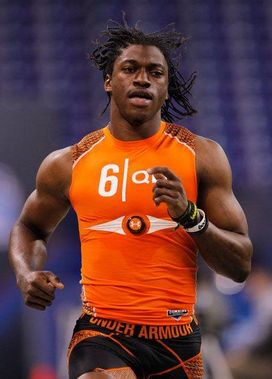 RG3 looks like a lock for the second overall pick.

2. Washington Redskins: Baylor QB Robert Griffin III
RG3 is the kind of athletic quarterback that would be an ideal fit in the Washington offense. He can make plays outside the pocket, throw on the run and create second lives with his legs.

4. Cleveland Browns: Texas A&M QB Ryan Tannehill
I would not be shocked if the Browns bite the bullet and overpay on a QB like Tannehill at four.

6. St. Louis Rams: Oklahoma State WR Justin Blackmon
Getting a big-play receiver for quarterback Sam Bradford is almost a must at this point. Blackmon can line up all over the offense and has the skill set to produce as a rookie.

7. Jacksonville Jaguars: North Carolina DL Quinton Coples
Infusing talent on the D-line is a must for Jacksonville and despite there being some motor concerns with Coples, he’s the kind of talent that is worth a top-ten pick and fills a big need.

8. –TRADE- Cleveland Browns via Miami Dolphins: Alabama RB Trent Richardson
The Browns move back into the top-ten from pick 22 in order to secure their workhorse back. Richardson could fall outside the top-five picks, but he isn’t going to last much longer than that.

9. Carolina Panthers: Memphis DT Dontari Poe
The NFL Combine helped Poe as much as anyone. He’s a massive kid with an elite combination of power, explosion and upside. His tape isn’t great, but I think he’s now a lock for the top 15 and the Panthers have a huge need inside for a body with his type of talent.

10. Buffalo Bills: Notre Dame WR Michael Floyd
Floyd has some character concerns and isn’t the most dynamic of athletes. However, he’s a guy capable of running the entire route tree, beating press coverage on the outside and going up to get the football. Will give the Bills a much needed talent on the outside to pair with Stevie Johnson. 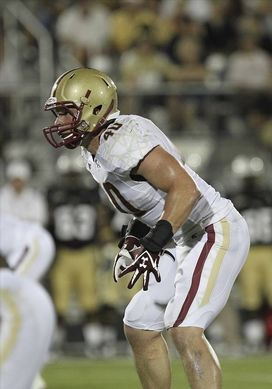 ICONKuechly is an option for the Top 15.

11. Kansas City Chiefs: Boston College ILB Luke Kuechly
With the need at offensive tackle addressed in free agency the Chiefs can now look at one of the safest players available in the front seven. Kuechly is a tackling machine with good size, natural instincts and above-average athleticism. Is the kind of talent who can make an impact inside from day one.

12. Seattle Seahawks: Illinois DE Whitney Mercilus
The Seahawks need a more dynamic pass rushing option to replace Red Bryant on obvious passing downs. Mercilus has a lot of natural talent and could be a force off the edge.

13. Arizona Cardinals: Iowa OT Riley Reiff
Reiff is an athletic tackle with good range off the edge, natural change of direction skills and has the ability to sit into his stance on contact. He needs to get stronger and fill out a bit more. However, this former tight end recruit has the type of athleticism and demeanor to mature into the kind of blind side protector the Cardinals are looking for.

14. Dallas Cowboys: LSU DT Michael Brockers
Brockers is as talented as any defensive lineman in the draft and is capable of maturing into a real game changer up front. He’s got the ability to play all over the Cowboys defensive line early and offers them a lot of versatility in their 34 front.

15. Philadelphia Eagles: Mississippi State DT Fletcher Cox
Cox is the kind of potential three-technique who can create behind the line of scrimmage and stop plays before they start. The Eagles don’t have a huge need at DT, but Cox could still mature into a playmaker inside, at a position where Philly lacks an impact guy.

16. New York Jets: South Carolina OLB/DE Melvin Ingram
Ingram has a great motor, is a high character kid and can get after the quarterback from a number of spots on a defensive front seven. He’s the kind of “NFL ready” prospect the Jets would love to get in the middle of round one.