Nevada has a pair of prospects worth watching Saturday 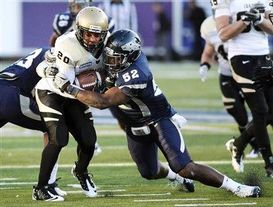 ICONJohnson is a solid tackler.

ILB James-Michael Johnson (6-2, 240)
A shorter, compact inside linebacker prospect with a thickly put together frame. Generates a natural snap into contact. When taking on blocks inside. Creates natural leverage for himself, is an explosive kid who can deliver a thump at the point of attack and to his credit does a nice job extending his arms and keeping himself clean. Isn't real long armed and has a tough time stacking and shedding consistently in the hole. Can stonewall defenders, but isn't a consistent shed guy once engaged. Is quick to decipher information though, keys off blocks well, is always getting early jumps on the football and exhibits an explosive element to his game when asked to close. Breaks down well in space, takes good angles to the ball carrier and is quickly able to snap his hips into contact and create collisions. Is a guy who can create turnovers at the point in the run game.