DE Kentrell Lockett: Mississippi (6-5, 248)
Flashes some real talent, however, his play gets too predictable as a pass rusher and he's still learning the game. Medical is a huge question mark as well, but he looks like a developmental guy at this stage who needs to prove he's healthy. 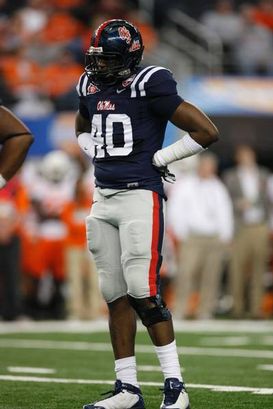 ICONLockett is a long, lean athlete with some upside.

DT Micanor Regis: Miami (6-3, 305)
Improved as a senior. Did a better job keeping his pad level down and using his quickness to get up the field. Could fight his way into an NFL rotation.

OLB Sammy Brown: Houston (6-3, 240)
A highly productive pass rusher who has come a long way since being a JUCO transfer. Has a feel for getting after the passer, exhibits a good burst and closing speed around the edge and is an intriguing 34-type prospect.

ILB Jerry Franklin: Arkansas (6-1, 245)
A coordinated middle linebacker prospect who picks his way through the line of scrimmage, finds the football and can hold his own in coverage. However, would like to see a more explosive element to his game in all areas. A solid MLB prospect, not the top-tier senior backer many are making him out to be in my view.

ILB Chris Marve: Vanderbilt (6-0, 242)
He's a natural leader and plays with a passion for the game. His size is the one negative to his game and he is a bit tight and lacks great range. Is a classic overachiever who could get a look late as a reserve only.

CB Donnie Fletcher: Boston College (6-1, 195)
Possesses good size, ball skills and has a natural feel in coverage. Gets a bit leggy, but can sink his hips and get out of his breaks. Looks like an ideal cover two type corner at the next level with some man-to-man upside.

CB Keith Tandy: West Virginia (5-10, 199)
A solid athlete with a strong frame, good ball skills and natural turn-and-run ability. At times, he will struggle to find the football in man and is raw with his footwork, but he has the talent to warrant a later round pick as a potential inside zone cover man.

CB Jeremy Lane: Northwestern State (6-0, 183)
Has the size and talent to get drafted. Needs to get a bit stronger and clean up his footwork, but has the skill set to play both inside and out in the NFL. 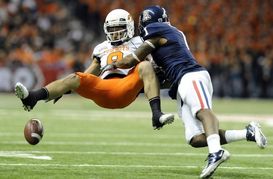 DB Robert Golden: Arizona (5-11, 200)
Might be limited to more of a cover two/click and close type corner, but he does have some developing press coverage skills. Also, has a lot of value as a safety, as he can anticipate in the deep half, drive on throws under him and play over a receiver in nickel situations.

FS Aaron Henry: Wisconsin (6-0, 210)
A good-sized kid with some natural cover skills and range, but is still learning the mental nuances of the game. Still developing at the position, but skill set says potential starter.