The return of the Sports Quotient’s annual Draft Preview series continues. Over the course of the next 10 weeks, we will analyze the top NFL prospects at each position. This first week, the focus is on wide receivers. Today’s wideout is Sammie Coates of the Auburn Tigers.

Sammie Coates is good player, who had a solid, but not not great or flashy by any means, college career. In his sophomore year, he caught 42 balls for 900 yards an 7 touchdowns, and last year, he caught 34 passes for 740 yards and 4 touchdowns. He played 3rd fiddle in Auburn's offense this year behind Auburn's potent rushing attack and his fellow wideout Duke Williams. Although Coates' numbers maybe don't show that he is a top receiving prospect, he did have a good career and is a very talented player.

Probably his best game came in the Iron Bowl last year against one of the country's best defenses, Alabama. In that game, Coates has five receptions for 206 yards and 2 touchdowns. Although this was not at all typical of his college career, it does show the raw talent, ability, and potential that Coates possesses.

Sammie Coates is a physical freak. He is what you would build a wide receiver to be: big, strong, and fast. We'll get a better sense of this in a few days when the Combine is over, but Coates will probably blow teams away with his gym stats and measurements. He has been said to run around a 4.3 40, and has come out and said that he wants to "beat everybody" in the combine events.

He is a competitive guy who uses his will and his skills to overpower defensive backs. He often is able to use his strength to get out of press coverage and tight man situations, and when his quarterback throws up a jump ball in the area, Coates has been known to go up and get it. He has a great catch radius and isn't afraid to get in there and block. 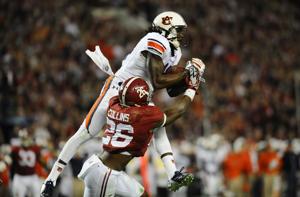 There are two big knocks against Coates: drops and route running. As far as the drops goes, the consensus is just that he gets a bit lazy at times with his hands and doesn't complete the catch and bring in balls that a wide receiver should catch. Personally, I don't put much stock in the criticism of draft prospects hands. It seems that every year, if you're not the number one or two receiver in the country then you will have "a problem with drops." These problems can and do persist in the pros, but often they are overstated as part of the draft hype.

I do think that the concerns about route running are very credible and very important. Often when fans look at wide receivers, they look at how big and how tall they are. They want to know whether the guy can make the catch in the back of the end zone over a defender. But what they really should be asking is whether the guy can properly run a route and separate form coverage. When the Broncos got demolished in the Super Bowl a few years ago, a big reason was that their non-Demaryius Thomas receivers couldn't separate from coverage. This skill is very important.

Coates is a hard guy to give a grade to. He is hovering around about the 6th best wide receiver in this year's draft class. He has all the athleticism and physical abilities that you would want in a wide receiver in today's NFL, but he needs to refine his skills in order to excel at the the position. If he has the work ethic to improve his craft, then there is no reason that he can't have success in this league. Last year there were a lot of wide receivers that went in the first round, and Coates may follow suit this year. However, if he does fall out of the first round, he shouldn't last very far into the second round.

The best fit for Coates is a team with a veteran staff with a history of being able to develop young players with a lot of raw talent. I think that I team with a veteran wide receiver or quarterback to help him learn the position could be really good for him. If Randall Cobb leaves Green Bay, I could see the Packers being a team willing to take a chance on Coates late in the first round. If it comes back around to the top of the second and Coates is still available, I think a team like the Jets who will likely pass on wide receiver in the first round to address a bigger need, could take him here.