Weak Points: Needs to improve upper and lower body strength, on the ground too much, falls off blocks.

Summation: Swanson is a fifth-year senior and four-year starter from Arkansas who looks good at times, but has some noticeable shortcomings when playing against elite competition.

Swanson has excellent height, but his frame is a bit narrow. He doesn’t have a lot of girth in his butt and his upper and lower body strength is just adequate. You can see this in the run game when he gets stalemated and falls off some blocks. A telltale sign of lower body strength deficiency is when a blocker’s legs give out on contact. This happens quite a bit to Swanson on tape. Still, when he plays against smaller opponents, he keeps his legs moving on contact and will look to finish.

The former Razorback is athletic enough to get to the second level and adjust on the move. Was used to pull a lot and does a good job in space making solid contact. In the inside run game Swanson will look to turn and seal his opponent.

In pass protection Swanson can set quickly and is alert to pick up stunts and blitzes. He has a good punch and can keep his hands inside. Is not a natural bender and, as mentioned above, lacks lower body strength. Will give up ground versus good bull rushers. Has the feet and agility to mirror.

Overall, Travis was a good college player, but he currently lacks the top physical traits to become a starter in the NFL. He is smart and tough, but needs to add strength and power. Unfortunately, Swanson might not have the frame to add the power needed in the lower body. Is athletic enough to be a backup guard and for this reason he should dress on game day as a rookie. I see him as being drafted anywhere from the late fourth to the late fifth round.

Weak Points: More strong than explosive, not a lot of growth potential.

Summation: A fifth-year senior and a four-year starter at Colorado State, Richburg is also a two-time co-captain and a strong vocal leader. Makes all the line calls, has better than adequate size, but not a lot of growth potential. 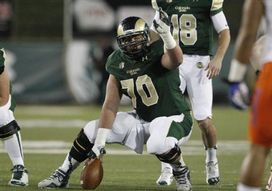 In the run game Richburg demonstrates good initial quickness. He can get to a block quickly and keeps his feet moving on contact. Plays with strength, but is more strong than explosive. Richburg is a tough, competitive guy who will look to win every battle. He is able to get to the second level (taking good angles) and make a productive block. Is used to pull some and is productive hitting a moving target.

In pass protection Richburg can set quickly and has fast hands with a good punch. Knows how to use his hands and consistently keeps them inside. Has the feet and balance to mirror through moves and is alert for line stunts and blitzes. Has better than adequate knee bend and does a good job anchoring versus bull rushes.

Overall, a very steady and physical player. I can see Richburg eventually becoming a starter in the league. Will have more value if he can also play guard. Should be a solid mid-round pick.