The writers at the National Football Post team up to bring you our final first round Mock Draft.

1. Carolina: Cam Newton, QB, Auburn
Addressing the defensive front seven may be the safe play for Carolina, but Newton’s talent is too much to pass up at No. 1. 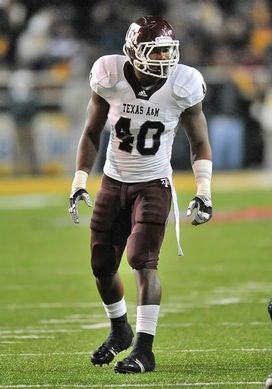 ICONJohn Fox and the Broncos take Miller off the board at No. 2.

3. Buffalo: Marcell Dareus, DT, Alabama
Defensive coordinator George Edwards needs talent in his front seven and with Dareus on the board at No. 3, this is an easy pick for the Bills.

4. Cincinnati: Blaine Gabbert, QB, Missouri
With an expected run on QBs and Carson Palmer out of the picture, the Bengals take Gabbert off of the board to work with new offensive coordinator Jay Gruden.

5. Arizona: Patrick Peterson, CB, LSU
The Cards see the talent Peterson can bring to the secondary and the return game from the first day of camp as a rookie.

6. Cleveland: A.J. Green, WR, Georgia
WR is a major position of need in Cleveland and with Green they get the top prospect at the position.

7. San Francisco: Robert Quinn, OLB, UNC
With Peterson off the board, the Niners address another need and get one of the top rush backers in the draft.

8. Tennessee: Nick Fairley, DT, Auburn
Fairley is still a top ten prospect and the Titans have no problem selecting the productive DT from Auburn at No. 8.

9. Dallas: Tyron Smith, OT, USC
When you watch Smith on tape, it is easy to see why he is the top OT prospect in the draft — and that makes this an easy pick for Jerry Jones.

10. Washington: Julio Jones, WR, Alabama
Look for the ‘Skins to try and deal tonight, but with Jones still on the board they fill a need for a playmaker outside of the numbers. 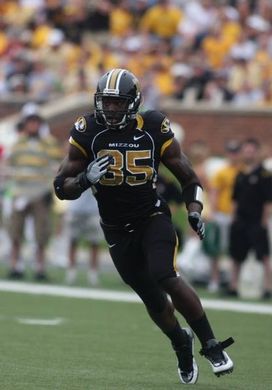 ICONThe Texans add to the front seven with the talent of Aldon Smith.

12. Minnesota: Da’Quan Bowers, DE, Clemson
The value with Bowers is solid for the Vikings at No. 12 and the draft day slide ends here for the former Clemson DE.

13. Detroit: Prince Amukamara, CB, Nebraska
Detroit could look to add to the D-Line under Jim Schwartz, but Amukamara fills a desperate need for corners in the secondary.

14. St. Louis: Corey Liuget, DT, Illinois
Liuget's stock has been climbing throughout the month of April and he is a fit at the 3-technique position in St. Louis.

15. Miami: Mike Pouncey, OG/C, Florida
An upgrade to the interior of the offensive line, Pouncey has the ability to play both guard and center at the NFL level.

16. Jacksonville: Ryan Kerrigan, DE, Purdue
There has been talk of Kerrigan playing OLB in a 3-4 scheme, but we see him rushing from the DE position down in Jacksonville.

17. New England: Cam Jordan, DE, California
Jordan is a fit for the New England scheme at the 5-technique and also offers the Patriots versatility in passing situations.

18. San Diego: J.J. Watt, DE, Wisconsin
The former Badger can give the Chargers a consistent pass rush from the DE position in San Diego.

19. N.Y. Giants: Anthony Castonzo, OT, Boston College
The former BC product is a solid addition to the Giants O-Line and eventually becomes the left tackle of the future in New York.

20. Tampa Bay: Adrian Clayborn, DE, Iowa
The Bucs get a three-down player in Clayborn that also will bring pressure off of the edge.

21. Kansas City: Gabe Carimi, OT, Wisconsin
With Carimi still on the board, the Chiefs select the former Badger and plug him in at right tackle as a rookie.

ICONSmith is a much-needed upgrade in the secondary for the Eagles.

23. Philadelphia: Jimmy Smith, CB, Colorado
Top 15 talent with Smith, but a slight slide down the boards puts him in Philly — where finding a CB is a priority.

25. Seattle: Andy Dalton, QB, TCU
Dalton’s game will translate to the pro-style offensive systems of the NFL, and Pete Carroll gets his QB at the end of round one.

26. Baltimore: Derek Sherrod, OT, Mississippi State
Sherrod can play left tackle in Baltimore, moving Michael Oher back over to the right side to give Baltimore two young tackles for years to come.

27. Atlanta: Kyle Rudolph, TE, Notre Dame
The Falcons could look at DE or WR here at No. 27, but they select Rudolph — the eventual replacement for Tony Gonzalez.

28. New England: Mark Ingram, RB, Alabama
Look for trade opportunities at No. 28 with New England, but with Ingram still on the board, the Pats can’t pass on the top RB prospect in the draft.

29. Chicago: Aaron Williams, CB, Texas
With no first-round offensive tackles left on the board, Jerry Angelo and the Bears make an upgrade at the CB position with Williams.

30. N.Y. Jets: Phil Taylor, DT, Baylor
At No. 30, Rex Ryan gets the top nose tackle in the draft by selecting Taylor.

31. Pittsburgh: Danny Watkins, OG, Baylor
With Aaron Williams going to Chicago, the Steelers select Watkins to add to the depth of their offensive line.