3. (5) New England Patriots (11-3): Tom Brady took over the game in the second half in Denver and put to bed any talk of a Tim Tebow comeback. 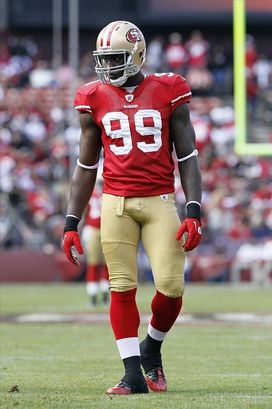 ICONAldon Smith and the 49ers' defense shut down the Steelers in the Monday night win.

5. (2) Pittsburgh Steelers (10-4): Give Roethlisberger credit for playing hurt, but he looked like an old man on that field last night.

9. (13) San Diego Chargers (7-7): The Chargers are playing their best football of the season—but will they get in the dance?

14. (15) Seattle Seahawks (7-7): Pete Carroll’s squad had Bears fans running for the exits in the 4th quarter in Chicago.