1. (2) Houston Texans (8-1): Do the Texans deserve the top spot? We think so after they went into Chicago and beat the Bears on Sunday night.

4. (5) Green Bay Packers (6-3): The Packers come back from the bye with two straight games on the road vs. the Lions and Giants. 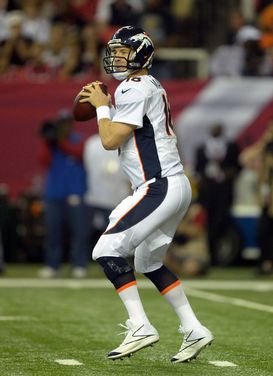 US PRESSWIREManning and the Broncos are rolling.

7. (10) Baltimore Ravens (7-2): The Ravens rolled the Raiders on Sunday as the prep for two games vs. the Steelers over the next three weeks.

8. (8) New England Patriots (6-3): The Patriots put up big offensive numbers against the Bills—again.

9. (7) Pittsburgh Steelers (6-3): While the Steelers wait to get the results on Ben Roethlisberger’s shoulder, its time for Byron Leftwich to take over the huddle.

12. (13) Tampa Bay Buccaneers (5-4): That’s three straight for Schiano’s Bucs. Can they hang around and make a push for a playoff spot?

13. (14) Indianapolis Colts (6-3): Did anyone see Colts-Pats as a marquee matchup before the season started?

15. (18) New Orleans Saints (4-5): That goal line stand vs. the Falcons was impressive from a defense that has struggled all season.

CONTINUE TO PAGE 2 FOR THE REST OF OUR RANKINGS