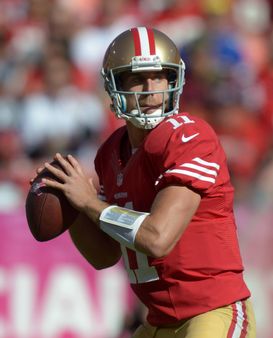 US PRESSWIREAlex Smith and the 49ers poured it on the Bills in their 45-3 win.

3. (2) Atlanta Falcons (5-0): The Redskins found out that Tony Gonzalez can still fill up the box score.

5. New England Patriots (3-2): With the production in the running game, the Patriots might be the toughest offense in the NFL to game plan for.

9. (15) Pittsburgh Steelers (2-2): The return of RB Rashard Mendenhall is an upgrade for the Steelers’ offense.

10. (8) Arizona Cardinals (4-1): The Cards have real issues on the O-Line and now need help at the RB position. Time to jump off the bandwagon?

11. (7) Philadelphia Eagles (3-2): Michael Vick has to protect the ball--because the amount of turnovers in Philly are ridiculous.

16. (11) Denver Broncos (2-3): That had to be a tough tape for the Broncos’ defense to watch after they were shredded up front in New England.

CONTINUE TO PAGE 2 FOR THE REST OF OUR POWER RANKINGS