With nearly all the Pro Days completed, most teams are beginning their final Draft meetings within the next week, so for the next four weeks we are going to compare and contrast two players who play the same position. This will give you the insight into the small things that can separate top prospects. Today we compare two of the top defensive tackles, Star Lotulelei and Sharrif Floyd, in the Draft. While we believe that there will be four or five defensive tackles, Sharrif Floyd, Star Lotulelei, Sylvester Williams, Sheldon Richardson and possibly Jesse Williams, taken in the first round, we are focusing on Floyd and Lotulelei here as they are generally viewed as the top two in this class. 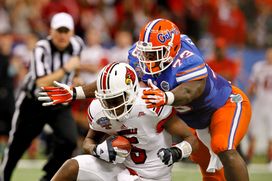 Before we get to the breakdown of their skill sets based off film evaluation, just the body type comparison is interesting. Floyd is a muscular, well-built man with more of a body builder’s type “v” physique from shoulders to waist, while Star is a thickly built player from top to bottom and has a thicker lower body than Floyd. Although measurements are not the sole determining factor in a prospect’s ability to translate to the NFL, the difference in arm length is surprising as Floyd’s measured 31