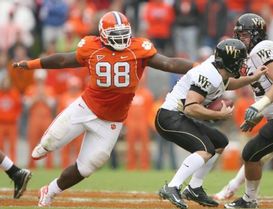 ICONThompson is a bear to move inside.

DT Brandon Thompson: No. 98 (6-2, 310)
Possesses a thick frame, good girth through the lower half and a naturally powerful looking frame. Can coil up into his stance well, and at times will get a bit arched at the back. For the most part, he keeps his base under him and exhibits and explosive first step off the football. Displays good ball awareness, is routinely one of the first lineman moving off the snap, keep his pad level down into contact, uncoiling an explosive snap through the hips into contact. Possesses the initial explosion to overwhelmed on contact, gains leverage, can get his head under the face mask of opposing blockers and run his legs through contact.

Doesn’t do a great job extending his arms into contact off the ball, but demonstrates good hand placement when engaged and has the upper body strength to simply overwhelm on contact. Is a linear athlete who will struggle to break down on ball carriers at times, especially when engaged. Looks a bit tight hipped and isn’t real sudden when trying to shed blocks vs. the run game. Possesses the power to simply rag doll opposing blockers, but isn’t real compact or quick when trying to stack and shed. Nevertheless, he’s a bear to move inside, can anchor vs. the double and is tough to move. Works hard in pursuit as well, has a solid motor with good range off his frame for his size when chasing the ball off his frame. However, he’ll at times get a bit upright initially off the ball and drop his head into contact, is strong enough to hold the point of attack still, but can be sealed from the action with ease.

Is a developing pass rusher. Struggled to keep his pad level down off the ball when trying to shoot gaps. Also, his pad level takes away from his initial burst and power through contact. Exhibits the natural strength to still fight his way through contact, but is a linear athlete who doesn’t have any kind of sudden/change of direction move off his initial rush. Can push the pocket on his bull rush, but again isn’t real sudden when trying to disengage and work his way toward the quarterback. Doesn’t have the dynamic explosive lateral quickness and despite his violent hands (at times), isn’t real quick/compact when trying to shed.

Impression: A guy who should be able to come in and be a lineman who can win inside vs. the run game. Looks a bit limited as a pass rusher who will be able to push the pocket, but is better suited as a one-gap guy who doesn’t need to be as effective with his pads off the ball. Nevertheless, a starting caliber 43 nose inside.