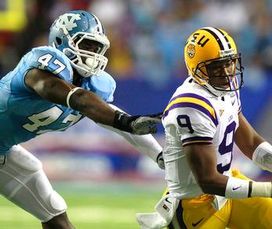 ICONBrown can really run in pursuit.

OLB Zach Brown: No. 47 (6-2, 230)
A compact, athletically built linebacker with a strong looking frame who possesses an impressive initial burst to his game when asked to close on the football. Looks natural in space, is quick to re-direct and possesses the closing speed to consistently make plays off his frame. For the most part takes good angles in pursuit vs. the run game and breakdowns well when running the alley. He generates good natural power into contact, plays low, exhibits a snap through the hips and will run his legs and wrap on contact. He will run himself out of plays at times in space, at times plays a bit out of control, but for the most part is a solid tackler. Exhibits better instincts and read-and-react skills than given credit for. He does a nice job of quickly locating the football, doesn’t bite on a ton of play fakes and is quick to diagnose the play. At times he will seal himself away from the action inside the box, but for the most part I was impressed with his natural feel of the game. He needs to do a better job using his hands and extending his arms in order to take on blocks inside, but he looks natural and sudden running around blocks and keeping himself clean. However, he too often leads with his shoulder at the point of attack and, despite his natural power as a strong kid, doesn’t shed blocks well inside and can be easily sealed from the action.

Looks natural in coverage. He’s quick footed, fluid in the hips and is consistently able to re-direct and explode out of his breaks. At times gets a bit overextended with hips working in his drop but he collects himself quickly, displays natural balance and exhibits the closing speed to still make plays on the football. He looks natural in zone coverage, keeps his head on a swivel and covers a lot of ground in space. Gets a bit impatient in man coverage, he likes to be physical, and will lose balance into contact trying to create a bump for himself when asked to re-direct. Also, is a bit slow to locate the throw when asked to turn and run vertically. However, he possesses the balance and fluidity that makes him tough to separate from and even if he does give up a step, possesses the second gear to quickly close. Displays the athleticism to hold his own in space in the NFL over the slot and in man coverage vs. NFL caliber running backs.

Impression: A run and hit guy with impressive athleticism and range. Possesses solid instincts and is a better read-and-react linebacker than given credit for, but still not elite in that area. Nevertheless, looks like a starting caliber 43 weak side guy who would be ideal in a cover two scheme.