The ultimate redemption for David Vobora will not come for years until one day he has to have a conversation with his children -- the one all parents must deliver at some point -- about doing the right thing.

Sure, the St. Louis Rams linebacker won a $5.4 million judgment from a Florida nutritional supplement company in U.S. federal court, but above all else for him the experience means he can move forward as an athlete, a person and one day as a father with his name cleared.

Vobora was suspended for four games in 2009 for violating the NFL’s policy on anabolic steroids and releated substances. He tested positive for methyltestosterone, an anabolic steroid, and said at the time the failed drug test was the result of a tainted supplement, specifically “Ultimate Sports Spray,” produced by S.W.A.T.S., a company also known as Anti-Steroid Program LLC. 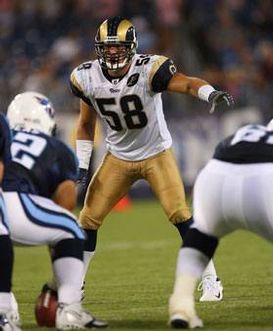 Vobora went through a lengthy case to clear his name vs. a Florida nutritional supplement company.

Then, he moved forward with a methodical legal case and didn’t say much about it until after he learned of the ruling by District Court Judge Rodney W. Sippel of the Eastern District of Missouri last Friday. He spent the weekend digesting it all as his team of professionals, including agent Marc Lillibridge, created a plan for releasing the news.

Vobora, who has 16 starts the last three seasons on the strong side, readily admits it’s the defense you hear nearly every athlete use: The supplement was tainted. Except his was and he was determined to prove it.

“There is a general stigma toward, ‘This guy tested positive and, yeah, he blames the supplement and says he is going to sue.‘ No one ever follows through or no one ever ends up winning these cases,” Vobora told the National Football Post. “Why is that? Well, it could be a number of reasons. But in my case, people ask me what my conviction was to follow through with this and to stick this out for such a long process and such a painful process, let me tell you federal litigation is a heck of a process.

“For me, the bottom line was I was innocent. I knew I was innocent. I knew I could prove my innocence. So, I set up the legal team and I told them No. 1 – I don’t care if I see a dollar in this – but vindication and clearing my name, that is what I am going to do and I am going to see this out whether I am still continuing to play in the league or if I am working as a school teacher or something.”

Money not the primary focus

Vobora received $2 million for damage to his reputation and $3 million for lost future income. He was also compensated for $90,588 in missed game checks, $170,000 in lost performance bonuses and $100,000 in lost marketing opportunities. But he says no figure is large enough to cover his good name.

“I knew the time would come and I would be able to clear my name and clear my family’s name more importantly because my passion is for football and everything I know comes from my family. My dad played at the University of Oregon. I grew up a huge football fan and I wanted my name to be cleared not only for my career and all the hard work that I have put into it, but for my kids one day to be able to look at and say, ‘Hey, my dad did it the right way.’”

Will he ever see the money?

Supplement makers are companies that often times disappear overnight, and when Vobora was asked if he expects to see $1 from S.W.A.T.S., it’s clear the question is one he’s already considered.

“No pun intended, that is the million dollar question,” Vobora said. “That will come another day. Right now, I am enjoying the fact the judge saw it from the true perspective and the vindication means everything. If compensation comes, that’s great. To be frank, I would say the compensation will be used to thank my legal team and my agent and the guys who have stuck by me through all this.

“I have gone through an incredible amount of pain and anguish. You think about being labeled as a cheater and a steroid user. Not only the horrible fan mail talking about, ‘You’re a disgrace to the game, we hope you never play a game,’ to threats. My mother and grandmother, they couldn’t get off the computer without seeing a blog site that was just bashing me. There were people in my hometown (Eugene, Ore.) that would ask just horrible questions. To have to go through that, that is what the judge saw when he said, ‘This guy deserves this ruling.’”