The Heisman Trophy is given out every year to college football’s most outstanding player. However, here at the NFP we’re taking a look at where each of the five finalists rank as prospects at the next level. 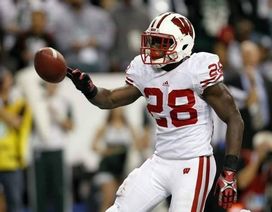 Ball's production has been elite.

5. RB Montee Ball: Wisconsin
I love the fact that Ball recommitted himself this past offseason, lost the needed weight, added quickness and had one of the most productive seasons ever as an NCAA running back. Even more impressive was the fact he did it against opposing defenses who knew the run was coming and would consistently load the box to stop him. Ball showcases a good feel between the tackles, natural quickness picking his way through traffic and has enough lateral quickness and power to break/slip tackles at the line and make his way into the open field.

The biggest concern I have with Ball was the same many had with former Wisconsin RB Ron Dayne coming out. How many of those rushing yards did Ball really manufacture on his own? The Wisconsin offensive line is as good as they come in college football with all five having the skill set to get drafted at the next level and a couple being top-end picks. Therefore, they routinely opened up gaping holes for Ball inside to run through and made his life much easier than most NCAA backs. Now, there is obviously still a lot of talent to Ball’s game, but I don’t see him as elite caliber prospect at the position and he looks more like a second/third round type talent who would be best served in a two-back stable at the next level.

4. DB Tyrann Mathieu: LSU
The “Honey Badger” has taken the NCAA by storm this past season, leading the LSU defense in tackles and filling up the stat sheet in just about every way imaginable. The 5-9, 175-pound defensive back is an undersized NFL prospect, but as only a true sophomore he still has some time to continue to mature and bulk up a bit. However, when watching Mathieu on tape the only thing that comes to mind is that “he’s just one of those guys who plays the game differently”. The game comes very natural to him the way he routinely gets early jumps on the football, always seems to be around the action, is fearless tackling in run support and is so fluid changing direction and making plays vs. the pass.

The guy is an NFL defensive back at the next level -- there is no doubt about that -- and I think he can certainly be a playmaker in an NFL secondary as well. Sure, the size could be an issue. But much like LSU uses him, Mathieu can line up at safety or the slot depending on the situation and you just let this guy go make plays on the football in a number of different ways, much like the Packers use Charles Woodson. Again, he’s only a sophomore and has a whole year left to bulk up, but a kid with his natural playmaking ability, I can’t see him getting past the back end of round one.

For the rest of the Heisman finalists click to page two...