Small school OT David Mims is no longer a “sleeper” 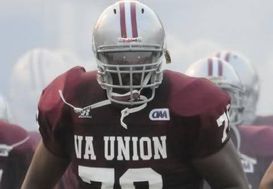 ICONMims is an impressive small-school prospect

When I was going over small school tape this summer, I was instantly intrigued by the size of Virginia Union OL David Mims who at 6-8 and 350+ pounds was at the time one of the bigger prospects in the entire draft. Now, it was pretty obvious that he didn’t have a firm grasp on what he was doing from a technique standpoint. However, for his size he was an impressive athlete with a long, strong set of arms, could bend and displayed some natural explosion off the football. He was an absolute dominant force at the D-II level and really opened my eyes with his ability to get out to the second level, breakdown and just destroy opponents on contact.