Ask ... And You Shall Receive
Now that fantasygoers have been granted clearance (Clarence?) to snare a superstar or two in fantasy drafts -- without fear of exhibition-game injury -- I thought it'd be proper to include the updated rankings for quarterbacks, running backs and wide receivers in one tidy Philanthropist column. But before we get to that, it's story time!

No Guts, Some Glory
Mike Wallace or Marques Colston?

This was the question posed by my wife during the 'Philanthropist & Friends League #3' draft on Sunday afternoon -- the third of four fantasy leagues hosted by yours truly, starring only loyal readers of this column. Why would a woman whose only interest in football lies with 1) Who is Auburn playing? 2) Who has a chance to knock off Alabama? and 3) maybe the Super Bowl ask about two top-15 receivers ... while sitting poised over the laptop, eagerly awaiting a reply? Let's do this in a timeline:

1 p.m. -- The League #3 draft room officially opens 62 minutes before the first pick. While lying on the couch, I ask my fellow owners, via Twitter, 'Which spot do I have?' in the 16-team megadraft. 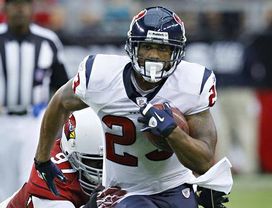 1:02 p.m. -- En masse reply of "3rd," which means I'm now stuck with gauging whether Arian Foster and his heightened hamstring woes are worthy of an elite pick. Twelve minutes prior to Saturday's game against San Francisco, Foster would have been a no-brainer at No. 3.

1:38 p.m. -- Just seconds before putting down the trusty iPhone and walking to the laptop to host/participate in the League #3 draft, a rush of negative, strength-sapping energy zooms from the stomach to my brain, causing the dizzy spell of all dizzy spells ... and one of the most sweat-inducing panic attacks of my young life. What is the cause of such nausea? Do I have a concussion? Where did that immense pain come from? ... and How am I going to sit at a computer, making draft picks and starting lively debates with the other owners, without taking a header into the glass table?

1:42 p.m. -- After repeated attempts to open my eyes without squinting or even sit up on the couch, I'm faced with the hard truth that I cannot handle the seemingly mundane rigors of a 90-minute draft, and that my wife would have to execute the task in my honor.

1:58 p.m. -- Hallelujah ... she's in! But the momentary exultation is quickly dulled with the realization that I'm on the cusp of vomiting ... and that Patricia has no experience with the "Player Queue" box -- a method of lining up candidates for drafting while on the clock -- which is crucial, given the 60-second time limit for picks.

2:02 p.m. -- Adrian Peterson is the first stud off the board. No surprise there.

2:03 p.m. -- Next up, Jamaal Charles ... leaving me the awkward, three-pronged choice amongst a petulant holdout (Chris Johnson), my consensus No. 1 in PPR and standard leagues when healthy (Foster) and my personal lock for 2,000 total yards (Ray Rice).

2:18 p.m. -- My wife and I spend approximately 212 seconds debating the merits of Marques Colston/Dez Bryant/Mike Williams/DeSean Jackson ... before I grab a plastic shopping bag to do something I hadn't done with that much intensity since 1991 (how Seinfeldian!). With no time to ask the wife if running backs Ryan Mathews, Knowshon Moreno or Shonn Greene were still on the board, I was left with the ultimate multi-task assignment of remembering the precise order of Colston/Bryant/Williams/Jackson while uncomfortably filling up a bag that was primarily designed to harness boxes of Frosted Flakes. The last words I hear are "Mike Wallace or Mar-keese Colston?" And with one final breath before being incapacitated for the next 18 minutes, I meekly murmured "Colston."

... And that's the story of how a woman who had no interest in her husband's livelihood became versed in the art of enduring a 16-team draft, where every other owner knows your likes/dislikes, sleepers/dead weight. All in all, she did a great job. Here's how she fared in the megadraft:

The Weekend That Was
Here are some mini-Revelations from a surprisingly bland preseason Week 3:

Is Stafford poised for a big year?

1. Matthew Stafford is singlehandedly disrupting draft boards. My fantasy ambivalence knows no end after watching Stafford (200 yards passing, 2 TDs) dissect the Patriots' first-teamers Saturday night. As a native Detroiter and current Georgian who's been foretelling Stafford's greatness since his first collegiate pass in 2006, I'm happy for his preseason success (24-of-31 for 356 yards, 5 TDs); however, from this point forward, there is a zero-percent chance of landing Stafford in Round 8 of a 12-team draft ... and that's disappointing news for owners who preach 'value' at every turn. On the positive side, Joe Flacco, who may throw for 27 touchdowns, can now be had for a rock-bottom price in Round 8 or 9.

2. Prospective drafters ought to buy whatever Antonio Brown is selling. It's not in my nature to go loco about a second-year wideout with 16 career catches, but who among us can possibly resist the temptation of Brown after his two highlight-reel-worthy TDs against the Falcons? We're not talking about garden-variety scores in a meaningless August exhibition; his speed, athleticism and insane body control draw immediate comparisons to Mike Wallace ... and his recent production should be enough to warrant a Round 9 flier pick in 12-team leagues. It also helps that QB Ben Roethlisberger loves targeting Brown in a pinch.

3. The over/under for Jaguars wideouts and 45 catches stands at 1.5. Outside of Mike Thomas and tight end Marcedes Lewis, the Jacksonville receiving corps reads like a list of past/future Arena League all-stars. Jason Hill? Cecil Shorts? Jarett Dillard? Armon Binns? Kasim Osgood? Dontrelle Inman? It's enough to audibly wonder if Jimmy Smith (age 42) and Keenan McCardell (age 41) are willing to come out of retirement? After all, Smith (12,287 yards/67 career TDs) and McCardell (11,373 yards/63 TDs) hold the Jaguars' top-14 marks for receptions in a single season. So much for franchise depth. Yikes!

4. Vernon Davis will hopefully survive the 49ers' shaky transition of power in fantasyland. I have all the confidence in Jim Harbaugh's ability to someday transform the 49ers into a championship contender, but the 132-day lockout was an absolute death blow to San Francisco's title chances in 2011. From a fantasy perspective, injury-prone Frank Gore is on the verge of a holdout or possible trade demand, Michael Crabtree has devolved into the NFL's Invisible Man and Alex Smith (2-year average: 2,360 passing yards, 16 TDs) is a living testament to fantasy mediocrity. Which brings us to Davis (134 catches/20 TDs in 2009-10) ... whose pre-existing rapport with the veteran Smith is enough to preserve his standing as the No. 4 tight end. For now. 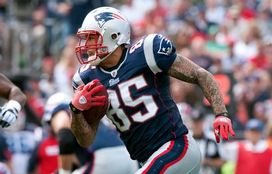 ICONAaron Hernandez could be a steal as a Tier 3 tight end.

<p> Running With The Moon, Part I
It took some time to settle on a list of Top 50 running backs (standard leagues):

Would You Like To Play A Game?
The National Football Post has once again partnered up with the good folks at FanDuel.com to offer weekly fantasy football contests throughout the regular season. Here 9;s a breakdown of how the FanDuel Game works: Players are given a $60,000 salary cap to assemble a starting lineup comprising 1 QB, 2 RBs, 3 WRs, 1 TE, 1 kicker and 1 D/ST.

Most points wins. And if you can put up more points than NFP head honcho Joe Fortenbaugh, you'll win $5 right off the bat. Oh, and for Week 1 ... there is NO entry fee! You'll have a chance to take home a slice of $300 in prizes without having to put anything down. Enter today!

The Real Thing
Here are my squads from the first two 'Philanthropist' drafts -- both 16-team leagues. For Draft #1, I was in an experimental mood and wanted to grab as many top 50 running backs as possible -- setting the table for sneaky-good trades around Week 5. Of course, by doing this, I'm putting a great deal of pressure on my thin corps of wideouts to carry the freight. This is a classic boom-or-bust draft ... with the potential of failing miserably:

For Draft #2, I had the clear objective of taking the best player available at every turn, regardless of position. The lone exception came in Round 6, where I splurged for Matthew Stafford, knowing he'd never make it to Round 7:

Into The Great Wide Open
Here are the revised rankings for my Top 51 wideouts in standard-scoring leagues:

Pet Peeves 'R' Us
I'm happy to take questions and respond to hate-filled messages on Twitter; but in return for the advice, I must ask one favor: Please refrain from including NFL players' Twitter handles when crafting a reply to one of my predictions -- positive or negative. Take Ray Rice, for example: I sincerely doubt that Mr. Rice cares about some yahoo in Atlanta guaranteeing 2,000 total yards this season; on the flip side, I doubt Tony Romo has any interest in my breakdown of why Matt Schaub might post slightly better fantasy numbers by season's end. Seriously, what's your angle, Twitter dude? Are you trying to curry Rice or Romo's favor by serving as their social-media watchdogs? It's not like this tattle-tale correspondence will be the first brick in a budding relationship between NFL star and Joe Six-Pack.

This time last year, some random Twitter honk had the gall to run to Chris Johnson after I said on national radio that Johnson would not rush for 2,000 yards in consecutive seasons. His Tweet: "Yo Chris, this guy doesn't think you can do it. What an a***ole!" To which I retorted, "So, I'm the bad guy for saying that Johnson will ONLY rush for 1,600 yards? You know double 2Ks has never been done before, right?" For the record, Johnson rushed for 1,364 yards on 316 carries in 2010. Hmmmm.

R.I.P. Killer Kowalski
Today's column is dedicated to the memory of Tom "Killer" Kowalski, the longtime Detroit Lions beat reporter/columnist for MLive.com and Booth Newspapers, who died Monday at the age of 51. Kowalski, who debuted on the Lions beat in 1980 (the first full season I can recall as a youth), was a larger-than-life institution in Detroit, known for his candor and humor in print and gentle nature when confronting/motivating cub reporters in the late 1990s and early 2000s, like myself. He was also a charismatic hero on the radio airwaves of WDFN, bringing life to the "Sean, Terp and Killer" show and reviving the credibility of a once-dormant sports station.

On a personal note, Killer was also a closet fantasy football nerd; and on Sunday, I awoke to a note from Killer that threatened my existence via bodily harm -- if my soothsaying advice didn't bring him a fantasy championship. If only I could've made him a winner! (cue deep, sad sigh) There will never be another media giant like Tom Kowalski in Detroit. Godspeed, Killer!