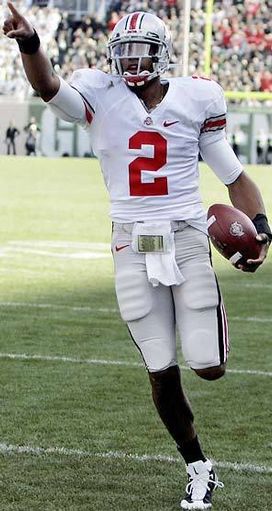 As I’ve talked about countless times throughout the 2011 draft process when discussing the quarterback position, being a successful signal caller in the NFL depends less upon a prospect’s physical skill set and more about his attributes from the shoulders up.

Is he the hardest-working guy on the team?

Do his teammates rally around him?

Does he have that “it” factor?

Is he clean off the field?

Will he win football games for you on Monday, Tuesday and Wednesday with his hard work and preparation?

All these questions that have to be asked when evaluating a quarterback prospect for the next level. And when I ask myself each of the questions concerning Ohio State quarterback Terrelle Pryor, the answer for each in my mind is “No.” Therefore, no matter how talented an athlete Pryor is, in my view he doesn’t meet the prerequisites needed for being a successful quarterback in the NFL.

However, that doesn’t mean this freak athlete can’t find a home elsewhere and be successful in the NFL. At 6-6, 235 pounds, Pryor is a really gifted athlete for his size with the ball in his hands. His combination of size, strength and explosion allow him to routinely break tackles with a devastating stiff arm and create after contact. He’s a strider who possesses sneaky straight-line speed that seems to consistently outpace defenders’ angles and also displays enough short-area quickness to create in tight areas as well.

He’s also a very natural and coordinated athlete who was a stud basketball player in high school and in my mind certainly possesses the skill set to mature into a capable NFL receiver.

Think back to his freshman bowl game vs. Texas when he effortlessly fought off a safety on a fade pattern in the end zone and then cleanly high pointed the football and snatched the throw like he has been doing it his entire life. Football/athletics just come naturally to him and I would expect him to develop rather quickly at any new position.

Obviously, he would need some work and would take some development. But, if I’m drafting Pryor, I want to gamble on him with his physical/athletic capabilities as a wideout and not with his mental make-up as a quarterback.

Watching Pryor on tape he looks like an athlete who runs in the high 4.4/low 4.5 range and at his size there are certainly some intriguing tools to work with. He’s a better overall athlete coming out of college than Matt Jones, who had character concerns as well and still went in round one as a projection player.

In all honestly, what’s the difference between Pryor and say a coordinated size/speed wide receiver prospect from a small school who’s going to need a year or two in order to contribute? Say a guy like Vincent Jackson when he came into the league? Not much in my mind. And I think if you give Pryor a year or two to develop as a wide receiver in the NFL, long term he will find a way to get on the field and make plays for an NFL offense both vertically in jump ball situations and working the three-step game as well. At his size, the guy doesn’t even need to be open in order to adjust go make a play on the football, and wideout prospects that can are always in high demand.

Overall, would I draft the guy as a quarterback prospect? No chance.

However, if he’s willing to make the move to wide receiver — and that is the million dollar question — I would certainly be willing to take a flyer on the guy in the 3rd/4th round range. He’s a better athlete than just about any other prospect that would go at that point in next year’s draft. Plus, he has a ton of upside and despite not being a real high character guy, there have been plenty of successful wideouts in the NFL that aren’t angels off the field. It’s part of the territory at the position and I definitely think it’s Pryor’s best chance to be successful in the NFL.