The Next Big Thing

Prose And Cons
For obvious reasons, Adrian Peterson, Chris Johnson, Arian Foster and Jamaal Charles have garnered the lion's share of fantasy attention this summer, as owners rack their brains to rank the Fab Four in Points Per Reception and standard-scoring leagues. But for me, the real intrigue with lies with the next wave of superstar backs -- Ray Rice, Rashard Mendenhall, Darren McFadden, Maurice Jones-Drew, LeSean McCoy, Michael Turner, Frank Gore -- any of whom could rocket to the top of the charts by season's end and lead you to a fantasy championship ... or crumple under the weight of great expectations. To kick off today's Philanthropist, let's focus on The Somewhat Magnificent Seven ... in their quest to be the No. 5 consensus tailback. 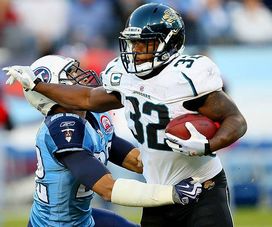 Running With The Moon, Part I
I purposely waited until Preseason Week 2 to debut my top 50 list of running backs in standard-scoring leagues -- to prevent readers from carrying an outdated cheat sheet to their respective drafts. As a disclaimer, these rankings are subject to change over the next two weeks:

Who Wants To Join The Twitter-Only League?
I've been inundated with requests from loyal Philanthropist readers to join their open fantasy leagues -- which I greatly appreciate. However, given my busy schedule of writing columns, hosting Facebook chats, recording podcasts for NationalFootballPost.com and already being committed to eight high-pressure fantasy leagues, there's little time for more competition with the masses. However, I will be hosting a 16-team, standard-scoring, Twitter-invite-only league again this year ... with the draft coming at 8 p.m. EST on Wednesday, Aug. 24. Mark it down!

Here's how you can score a league invite: Sometime between 7-8 p.m. EST tonight (Aug. 17), I'll float the single code word "Fantasy" on Twitter ... and the first 15 respondents to specifically reply "Freakout" (after my posting) will earn automatic entry into the 16-team league. Now, if there is absolutely no way you can make the Aug. 24 draft date/time -- which is set in stone -- please don't waste anyone's time by trying to gain entry. Why so secretive about the process, you ask? I would like the 15 owners to be regular Philanthropist readers, and this method effectively separates those who enjoy/hate the column ... from those who are blindly joining a random league.

Running With The Moon, Part II
... And here's the bottom half of the Top 50 tailbacks:

The Philanthropist likes Vincent Jackson and the Chargers in Week 1.

Survivor Act Of Self-Preservation
Ever heard of a survivor pool? It's a simple game where contestants are asked to select one lead-pipe cinch for wins in Weeks 1, 2, 3, 4, etc. -- with the caveat of only using a particular club once per season (in victory, at least). For example, I have San Diego defeating Minnesota at home in Week 1. By virtue of that, I cannot designate the Chargers to win in Weeks 2-17. The same holds true for Dallas (over Washington) in Week 3; after that game, I can no longer pick the Cowboys to prevail the rest of the way. Any incorrect picks automatically knock a contestant out of the pool; and if anyone should be left standing by Week 17 -- an impossible task for me last year -- they're entitled to all or some of the winnings (which can be quite lucrative in some leagues).

Survivor Rules To Live By
1. Above all, target a home team to win that week.
2. When in doubt, exploit bottom-feeder clubs on the road (Redskins, Bills, Bengals, Panthers, etc.).
3. Don't be afraid to pick the champion Packers to lose on the road -- especially when playing indoors.
4. It's best to avoid primetime games between teams of similar stature.
5. Don't use the Packers, Ravens or Saints in Week 17 -- after they've clinched playoff spots.
6. Avoid picking against the Lions early in the season (with Matthew Stafford wreaking havoc).
7. Avoid picking against the schizophrenic Raiders at any point of the season.
8. Only pick home upsets from games involving intra-divisonal opponents.
9. Don't be afraid to pick against the Giants in the latter half of the season (big run of daunting opponents).
10. Don't get sucked into revenge games involving Kevin Kolb, Albert Haynesworth, Steve Smith (Eagles) or Donovan McNabb -- either in victory or defeat.

D-Mac The Knife
As if today's column hasn't offered enough Darren McFadden sightings -- remember this mad-dash TD against South Carolina? -- here are some mini-Revelations detailing D-Mac's fantasy potential with the Raiders ... you know, the only team since the NFL-AFL merger (1970) to sweep its division games and still miss the playoffs.

What He'll Like: In a surprise to few, the Raiders went 6-2 last year in games that QB Jason Campbell attempted 26 or fewer passes. For 2011, that same pattern would translate to plenty of touches for McFadden and Michael Bush (8 TDs last season) ... and less pressure on Campbell (61-percent career passer) to carry Oakland against the AFC West and NFC North -- arguably the NFL's toughest divsion this season.

What He'll Like, Part II: Very few clubs could lose a top-flight offensive guard like Robert Gallery without missing a beat, but the Raiders' foundation -- on paper -- appears to be rock-solid. Stefen Wisniewski, Joseph Barksdale and left tackle Jared Veldheer, the pride of Hillsdale College, are high draft picks and long-term keepers. And guards Roy Schuening and Cooper Carlisle possess a keen flair for road-grating. And then there's Bruce Campbell, the