Let's face it, folks: offenses clicking on all cylinders are fun to watch. Touchdowns are more exciting to most fans than a solid defensive play, and while we all love a nail-biting defensive battle from time to time, shootouts are generally more fun.

Quarterbacks making perfect throws, running backs finding the hole and juking undersized corners out of their shoes and receivers making highlight-reel catches pull us all from our seats to cheer or scream as necessary.

Granted, this is not a list of necessarily the worst units in the league, because schaudenfruede exists and sometimes complete and utter failure can be entertaining; this is a list of the simply unwatchable. The boring, grass-growing-level units who couldn't inspire excitement if they lit fireworks into their own faces (sorry, Jason Pierre-Paul).

To make this list, a team needs to be uninspired and mediocre at its best, and downright miserable at worst. 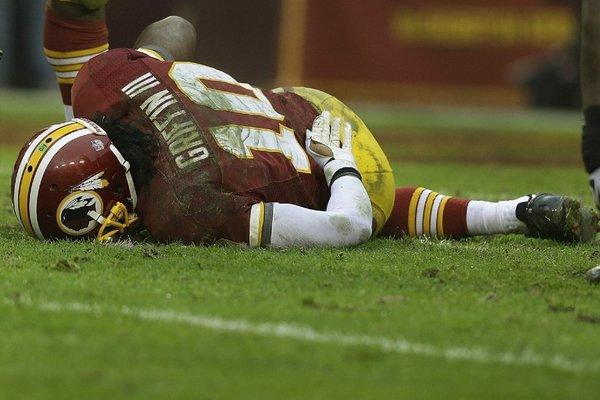 Oh, Robert Griffin III. We fondly remember your Offensive Rookie of the Year campaign in 2012, when you lit up the league with both your arm and your legs, making thrilling play after thrilling play and leading your team to its first playoff appearance in five years. Deep bombs, epic rushing from fellow rookie Alfred Morris and some inspired play from Pierre Garcon on the outside made Washington fun to watch week in and week out.

Not so much. Griffin has been hobbled in every season since, looking nowhere near the same as that magical year (much like fellow OROY winner Sam Bradford, not coincidentally).

The rushing attack has been solid, if not flashy. Morris barely cleared 1,000 yards last season on a pedestrian 4.1 YPC.

The passing attack was...interesting, at least, in that between Griffin, Kirk Cousins and Colt McCoy the "Washington Quarterback" put together a 66.5 completion percentage, 4,461 yards and 18 TDs, but also took 58 sacks.

The team made no significant offseason moves on offense, and lost fan favorite Roy Helu to free agency, meaning the loss of the team's primary third down back. If Griffin can come close to his 2012 form, this team will perhaps make some noise in the NFC East.

But honestly, what are the chances? Houston fans, this is the face of your most successful rostered quarterback. Let that sink in for a moment.

Remember, we're talking about offenses now, not defenses or teams as a whole. Want to switch to Red Zone when a team is driving on Houston's defense to see how J.J. Watt ruins someone else's lifelong NFL dream? You're certainly not alone.

However, as of this writing Watt has not made any moves toward taking over under center, and (as far as I know) he's only human.

Arian Foster is still incredible, and incredibly enigmatic, sure, but he's the lone bright spot among this group of "who?"

The team lost franchise hero and all-time leading receiver Andre Johnson to a division rival; Johnson finally apparently got sick of his career's best signal-caller being That Guy Who Took Over Matt Schaub's Body That One Season Who Was Definitely Not The Real Matt Schaub. Hoyer and fellow one-time Tom Brady backup Ryan Mallett are competing for the starting job. Foster's backup is a guy named Alfred.

Quarterbacks not named Ryan Fitzpatrick managed about a 55 percent completion rate, 835 yards and four TDs over the four games they played (Case Keenum and Ryan Mallett).

Other than Foster, who inevitably will hit the injury list at some point during the season, who are you watching on this team unless they're taking up a spot on your fantasy roster?

Shaun Hill, the Great Old Hope. While Hill is no longer a member of the Rams, and they are my team, I must be pragmatic here. The Rams and Texans are in the same boat, but St. Louis lacks even a Foster-esque star on the entire offensive side.

Around the NFL's Chris Wesseling called the Rams offense "probably the worst in the league," citing a patchwork offensive line, rookie and underwhelming running backs and a no-name group of wide receivers.

As a Rams fan, I cannot dispute these points. Nick Foles, the new sheriff in town under center, struggled mightily last season in Chip Kelly's "quarterback-proof" offensive system before injuring his shoulder. I wouldn't be surprised if the opening day offensive line included one of Jeff Fisher's brother's cousin's bartenders. Todd Gurley will most likely open the season on the PUP list and Tre Mason is no one's pick to light it up after averaging only 63.8 YPG last season (leading the team, by the way). The presumptive WR1 is Kenny Britt, who no one has heard from since 2010.

Tavon Austin, presumably the most "exciting player" on this offense, has looked more lost in the system than your mail-order bride's green card since being drafted, and will work for his second offensive coordinator in three years who won't be able to get him the ball effectively.

Expect 13-10 games involving the Rams more often than not, so feel free to do the dishes or replace your home's insulation during their prime-time games. Blake Bortles has 11 touchdowns to his name. He was sacked 55 times last season. The Jaguars' offense, both rushing and passing, only scored 24 touchdowns last season. Half of NFL passing offenses scored more.

Who's the starting running back? Toby Gerhart? Newly-drafted rookie T.J. Yeldon? Storm Johnson? Does it matter?

Who's their WR1? Allen Robinson, but you wouldn't know that if A) you don't play fantasy football or B) I didn't tell you.

While Jacksonville's defense and another year under coach Gus Bradley might make the team more competitive, even adding Julius "Got To Play With Peyton" Thomas can't generate a single spark of interest in this godforsaken North Florida wasteland.

Did you know there's a website called FactoryofSadness.co? It's a real site, unfortunately, but that nickname for Cleveland is actually a thing that exists.

Now, Cleveland's top-billed ranking on this list is assuming Josh McCown takes over the starting duties for the entire season. If Johnny Rehab gets under center, good or ill, this team immediately becomes appointment television.

McCown, on the other hand, was (apart from that weird, Twilight Zone-ish streak in Chicago) an absolute dumpster fire last season. He completed 56 percent of his throws, matched 11 scoring throws with 14 interceptions and was sacked 36 times in 11 games, good for a 35.71 QBR (out of 100). This, remember, was with serious talent at the re ceiver position in rookie standout Mike Evans and stalwart veteran Vincent Jackson.

But whom does McCown "get" to throw to in Cleveland, you may be wondering?

You might remember Bowe as the WR1 for an offense who failed to throw a single touchdown pass to a wide receiver last season.

Hartline, meanwhile, has never scored more than four times in a season and has never topped 76 receptions.

Is the running game better? Sure, perhaps. Isaiah Crowell, Terrance West and rookie Duke Johnson (who may be the most entertainingly-named three-headed backfield in the league) won't be lighting up highlight reels anytime soon, though, and a grind-it-out, cloud of dust attack to try and minimize McCown's awfulness makes for depressing television.