Breaking down my top five most underrated prospects for the 2012 NFL draft. 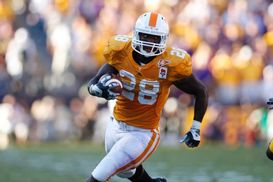 ICONPoole knows how to run against eight man fronts.

1. RB Tauren Poole: Tennessee
A thick, strong back who runs hard and displays natural one-cut ability. Runs a bit upright at times and isn't overly fluid making defenders miss. But can break tackles, play on third down and looks like a solid contributing NFL back.

2. SS Winston Guy Jr.: Kentucky
Still has some upside at the position, as he can tackle, displays solid range in space and above-average instincts in all areas of the game. Should be a heck of a special teams player early and looks like a guy who eventually can fight for playing time.

3. DE Shea McClellin: Boise State
McClellin is a productive pass rusher with a big motor, good skill set and can get after the QB in a number of ways. Looks like a potential starter at the next level.

4. DT Christian Tupou: Southern California
Tupou is coming off a knee injury, which forced him to miss the 2010 season. However, he looks like a better nose tackle prospect to me than Stanford's third round pick Sione Fua from a year ago.

5. CB Troy Stoudermire: Minnesota
Has some character concerns and is really raw, but the skill set is there for him to mature into a contributing corner in the NFL. Plus, as he develops he can always help out on special teams as a return man.