Trouble on the horizon?

An NFC assistant coach had gone through the video of Tampa Bay’s season-opening loss to the New York Jets earlier in the week and came away with an ominous concern for the Buccaneers coaching staff.

“That’s the kind of performance where you can lose your players in a hurry if you’re not careful,” the coach said. At the time, the coach was unaware of a story Wednesday that Bucs players had already held a players-only meeting before the season and a subsequent story about quarterback Josh Freeman missing the annual team photo.

“We all know it as coaches. If the players don’t think you can help them win, they’ll tune you out in a heartbeat,” the coach said. “You look around the league and you see some of the stuff that happened and it makes you shake your head.”

While the quality of football didn’t matter much to fans in the opening week (FOX, NBC, CBS and ESPN all reported ratings at or near record levels), that doesn’t mean coaches were excited by it.

League-wide, there were four safeties and 217 penalties (the second-most of any opening week since 2005). Interceptions, fumbles and sacks were all above the per-game levels of 2012. Even officiating looked rusty, including mistaken rules interpretations in three games (Green Bay at San Francisco, the New York Giants at Dallas and Houston at San Diego).

The display by Tampa Bay was particularly bad. The Bucs were penalized 15 times (two were declined). Five of those penalties were called in the first seven minutes of the game, including a delay-of-game after a timeout. The Bucs had a safety on a botched shotgun snap when Freeman was still calling signals and not looking at the center. 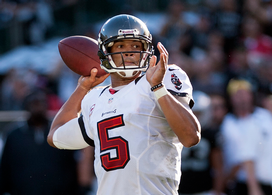 Against the Jets in Week 1, Freeman and the Bucs were called for 15 penalties committed two turnovers and amassed only 12 first downs.

Worse, the team lost after a late-hit, out-of-bounds penalty against linebacker Lavonte David helped set up the New York Jets for a game-winning field goal.

As the assistant coach said: “I’ve been there. Those ones gnaw at you the whole season.”

The question for Tampa Bay is whether this is a one-time glitch or a sign of the team unraveling already after back-to-back bad seasons. In 2012, the Bucs lost five of their last six games to finish 7-9. In 2011, under former coach Raheem Morris, the team became completely unraveled as it lost its final 10 games and finished 4-12.

Coach Greg Schiano tried to downplay the mistakes after the loss. On Wednesday, he denied a story accusing him of manipulating the votes for team captain. Before the season, Freeman was not voted a captain by his teammates after having the role the previous three years. Schiano counted the votes, but vehemently denied he rigged the results.

When it came to bad performances, the Bucs were merely the outlier in a week of questionable play. To former long-time NFL team executive and current ESPN analyst Bill Polian, that wasn’t overly different than in recent years.

“No, about what you would expect in week one,” Polian wrote via text. “Officiating too. Lack of practice in camp effects tackling.”

“Your starters don’t even play in the last game, they maybe play 10 or 12 plays in the first game, the same in the second game and then maybe half a game in the third game,” Zimmer said.

He added that lack of familiarity with wrinkles in the game plan and what the opposing team might run adds to the problem.

Polian and Zimmer may be on the right track. That doesn’t make a lot of coaches feel good about the situation.

“Don’t put (the Bucs) out there alone. There was a lot of bad football out there and probably a lot of really worried coaches,” the NFC assistant coach said. “A couple of us were watching the Giants on Sunday night and it’s like what’s going on? This is a Tom Coughlin-coached team. Tom’s teams don’t usually beat themselves like that.”

The assistant coach was then reminded that New York General Manager Jerry Reese basically put the entire team on notice during the offseason.

“If you’re on notice, that’s not a good first impression,” the coach said.