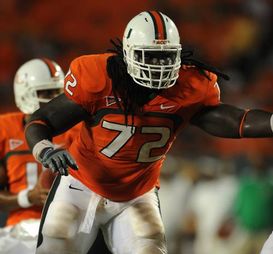 ICONWashington can pull and get out to the second level.

- A thick, naturally strong kid with a muscular set of legs and good girth through the base.

- Possesses good length for his size and has the length to consistently gain leverage into contact.

- Has experience at both guard and tackle and offers some versatility to an NFL offensive line.

- Possesses the ability to bend, sink his hips and keep his base/feet under him.

- Showcases natural athleticism for a big man with the range to reach speed off the edge in pass protection and push explosive defenders past the pocket.

- Exhibits natural fluidity in the hips when asked to mirror inside. Displays good balance/coordination with his footwork through contact and can easily push defenders past the play.

- Demonstrates “plus” recovery ability for his size and can quickly make up for a false step, slide laterally and cover the necessary ground.

- Extends his arms well into contact in the pass game and once he gains leverage can sink his hips and anchor with consistency inside.

- Showcases a natural feel picking up blitzing linebackers from the second level and stonewalling them on contact.

- Is a naturally powerful kid who can create a push in-line in the run game through contact once he drops his pad level and starts churning his legs. Has the power to overwhelm.

- Showcases good initial quickness off the snap, is quick footed getting around defenders and sealing on the outside.

- Exhibits a snap through the hips when reaching blocks off his frame and can collapse the pocket down from the backside.

- Is a “plus” athlete on the move, takes good angles into contact, showcases good range and breaks down well in space.

- Can drop his pad level quickly and cut down defenders on contact both at the line of scrimmage and down the field.

- Has a bit of a mean streak, will finish blocks and plays hard through the whistle.

- Has a ton of upside. Has never really had a chance to just focus on one position and the skill set is there for him to develop his technique at one spot quickly.

- Has never become real natural as a technician at either guard or tackle. Has moved back and forth between the two spots, which stunted his growth a bit.

- In pass protection on the edge, he doesn’t do a great job sitting into his base initially on contact, tends to double over at the waist and will lose his balance and give up leverage because of it.

- Isn’t a great puncher into contact either, is heavy handed and can stick through contact, but needs to do a better job keeping himself clean at the point with a compact jolt.

- Doesn’t do a great job working in tandem with his center/guard combo at this stage, will blow some assignments and give up penetration because of it.

- Tends to pop upright in the run game after his initial step and then buckle at the waist into contact as an in-line guy.

Impression: The talent is there for this guy to mature into a guard you can win with consistently inside at the next level. He needs to improve his pad level in the in-line game and tighten up his footwork in all areas. However, with a year of seasoning he certainly should mature into an above-average guard in the NFL with the talent to start at right tackle as well.