Top-ranked players still sitting on the NFP big board… 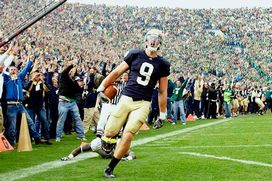 1. TE Kyle Rudolph: Notre Dame
I see Rudolph as an upper echelon “on the line Y” at the next level who can win in both the run and pass game.

2. CB Brandon Harris: Miami
He’s a bit undersized, but possesses good fluidity when asked to turn and run, gets up to speed quickly and consistently adjusts to the football. A starting caliber corner at the next level.

3. DE Da’Quan Bowers: Clemson
He’s falling because of the knee issue. A first-round talent, but the medical was too much for him to go in round one.

4. OLB Akeem Ayers: UCLA
Ayers is a good talent who can play a number of spots in both a 34 and 43 linebacking corps. However, a poor Combine and character questions hurt his chances of going in round one.

5. OL Stefen Wisniewski: Penn State
He’s not an elite athlete and I really didn’t think he would go in round one. However, whoever drafts him is going to get a solid starting interior presence from day one.

6. OT Ben Ijalana: Villanova
Reminds me a lot of 2010 second-round pick Rodger Saffold. If Ijalana can add more of a mean streak to his game at the next level, he could be the steal of round two.

7. OLB Jabaal Sheard: Pittsburgh
Possesses a sophisticated pass rushing arsenal, plays with a high motor and should be one of the first prospects off the board come round two.

8. WR Titus Young: Boise State
A gifted vertical threat who can make plays both inside and out. Has some character concerns, but possesses a little DeSean Jackson-type playmaking ability to his game.

9. OLB Mason Foster: Washington
A real solid football player inside. Tackles well, can play in space vs. the pass and looks like a potential starter in a 43 early in his NFL career.

ICONLeshoure has the ability to start at the next level.

10. RB Mikel Leshoure: Illinois
Possesses the frame to carry the load at the next level and is an NFL-caliber workhorse back.

11. DT Drake Nevis: LSU
He’s undersized and underrated. Won’t fit into every scheme, but as a one-gap guy he could be a big-time pass rusher at the next level.

12. RB Ryan Williams: Virginia Tech
A violent, slashing type runner who was banged up in 2010, but when healthy can be dynamic in the open field.

13. OLB Martez Wilson: Illinois
Possesses a high-cut frame, but is athletic, balanced and can really move for a big guy. Offers scheme versatility as well.

14. DT Stephen Paea: Oregon State
Displays a dominating punch on contact, can slip blocks laterally and in my mind is going to be a second-round gem of a player.

15. CB Curtis Marsh: Utah State
A personal favorite. Marsh, a fluid kid for his size, can be physical off the line and still has a lot of upside to his game after making the move to corner only two years ago.

16. WR Leonard Hankerson: Miami
His combination of size, body control and short-area quickness will make him an ideal three-step receiver at the next level. Just needs to be sure to consistently catch the football.

17. CB Curtis Brown: Texas
Displays natural fluidity and balance in his drop and is clean getting out of his breaks. Needs to get stronger, but has the frame to handle more weight.

18. FS Rahim Moore: UCLA
A coordinated center field type safety who can make plays on the football and hold up in space. The best prospect the safety class has to offer this year.

19. OL Jason Pinkston: Pittsburgh
He isn’t the sexiest of prospects. However, I think he can fight for starting reps early during his NFL career at either guard or right tackle.

20. WR Jerrel Jernigan: Troy
An explosive slot receiver with long arms, strong hands and knows how to quickly separate on the inside.

Best of the rest…