While the conference games have generally not yet begun, players are already moving up and down draft boards based on their early season performances. A player can drastically change their draft status between the beginning of their final season and the draft, but often their early season performance is what gets their name buzzing around the scouting community. Here is a quick break down of five prospects whose draft stock is on the move after three weeks. The measureables listed are either verified, which means taken by an NFL scout, or estimated.

Chase Thomas Outside Linebacker Stanford Senior
6025 (Estimated) 246 (Estimated) 4.85 (Estimated) Potential 3rd/4th Round Pick
After a productive junior season in 2011, Thomas was still not viewed as a top prospect. However, a strong start to the 2012 season has scouts talking about his potential as an outside linebacker for a team that plays a 34 defense. As expected for a Stanford player, he is a smart player who uses good technique (Plays with good knee bend, carries out responsibility consistently and uses hands well) and is constantly around the ball. Always a highly competitive pass rusher, he has impressed in 2012 with better initial quickness and pass rush technique, which has let to him constantly being able to pressure the quarterback as he did against Matt Barkley this Saturday. If he is able to continue playing at this level throughout the 2012 season he could work his way into the second / third rounds of the 2013 NFL Draft.

Hugh Thornton Offensive Tackle Illinois Senior
6035 (Verified) 305 (Verified) 5.20 (Estimated) Potential 3rd Round Pick
Having played guard most of his career prior to 2012, Thornton’s value has gone up as he has impressed playing left tackle for Illinois so far. Despite lacking the ideal height (NFL teams generally do not like OT’s under 6-4), his ability to pass block with good base/leverage combines with good feet so that he can slide out easily to cut-off edge rushers and re-direct / change directions easily to adjust to quick secondary pass rush moves. Thornton has “heavy” hands and does a good job of jolting pass rusher with punch and gets a “good fit” to tie up and eliminate man. Not only does he excel in pass pro, but he can collapse defensive linemen down the line on “down/side block” to open hole for running back and can pull and get outside to lead block effectively out in space. Some NFL teams will automatically consider him as a guard due to his height, but his play so far in 2012 has a number of teams keeping him at tackle according to NFL scouts we spoke with.

William Campbell Nose Tackle Michigan Senior
6050 (Estimated) 320 (Estimated) 5.35 (Estimated) Potential 5th Round Pick
A virtual unknown because he was a backup until this season, Campbell has impressed with his potential as a nose tackle in his first season as a starter. NFL scouts told us that he already looks the part of the massive nose tackle that 34 defenses are so desperate to find. His raw, physical size and good use of hands vs. blockers help him to easily anchor against one on one run blocks and double teams. Campbell is unlikely to move up draft boards enough to be drafted on the first two days of the draft, but according to sources he reminds many of current Browns’ defensive tackle Ahtyba Rubin who was a sixth round draft pick and has developed into a top level starter. 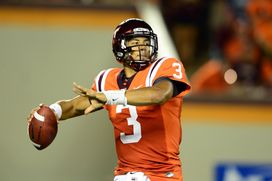 US PRESSWIREVirginia Tech QB Logan Thomas is about to throw a pass.


After Cam Newton’s incredible rookie season with the Panthers, many NFL people told us they felt that Logan Thomas had the potential to be a top ten pick in the 2013 Draft because of the similarities (Size, arm strength, athleticism and deep accuracy) between he and Newton. However, at this point in the season all Thomas has done is frustrate as he has not improved from last season when he battled inconsistency in nearly every game. Against Pittsburgh this weekend Thomas looked uncomfortable in the pocket, unsure of himself (Which led to slow decision making), threw passes into bad spots and really lacked accuracy. If Thomas continues playing at this level it would be a terrible mistake for him to come out early for the 2013 NFL Draft as he would not be drafted in the first three rounds.

Will Compton Inside Linebacker Nebraska Senior
6006 (Verified) 226 (Verified) 4.85 (Estimated) Potential Undrafted Free Agent
A player some scouts viewed as similar to former NFL linebacker Ben Leber, Compton has not played well enough in 2012 to warrant that comparison. While he is definitely a tough and highly competitive linebacker who is constantly around the ball, he lacks the talent to be viewed as a potential starter down the road. Too often he takes a false step at the beginning of the play and lacks the speed to make up for it. In addition, he is a straight line player who lacks the agility and flexibility to change directions quickly to be effective playing off the ball in coverage. Based on what I have seen this season, Compton is more likely to go undrafted than to be picked in the 2013 Draft.