Will Jamaal Charles Fall Off This Year?

Jamaal Charles has been one of the NFL's better backs since he entered the League in 2008. He's rushed for over 1,000 yards in 5 of his 7 seasons and made 4 Pro Bowls. In 2013, he led the AFC in rushing and currently holds the Chiefs' franchise record for total rushing yards. Somewhat surprisingly, Charles also has the highest yards per attempt among backs in NFL history. At 5.5 yards, he so far has beaten out the great Jim Brown, who had 5.2.

But all good things must come to an end, right? Jamaal will be 28 years old at the start of the 2015 season. He has already played 7 NFL seasons, the majority of which put him under a full workload, and badly injured his ACL in 2011. The average career length for NFL running backs is a paltry 3.11 years. The table below, from Best Tickets blog, suggests how especially grueling the running back position is.

The other backs from Charles' rookie class have already begun to show signs of wear and tear. In the 2014 season, the once-explosive Chris Johnson rushed for 663 yards. Darren McFadden, who put up almost 1,200 yards in 2010, moved the ball 534 yards. And one member of the 2008 draft class, Rashard Mendenhall, has already retired! Admittedly, both Justin Forsett and Matt Forte, in addition to Charles, exceeded 1,000 yards rushing, but many adherents of conventional wisdom see these performances as swan songs, not as indications of unrealized potential.

But this off-season, Charles has insisted he's not done: "I feel like I’m young all over again. I feel like I am 20, 21. I feel good, I feel healthy, I eat right, I take vitamins, I do yoga. I am doing everything I am supposed to do to keep my body up at age" (from the Kansas City Star). Charles cites the improvement of medical technology as one reason he may be able to play on: "They've got all kinds of technology now, all kinds of medicine people have come up with to stay healthy. At the end of the day, an ACL you couldn't play (with), it was the end of a career. Now they've got all kinds of things that you can be back in like five or four months. The future is changing, football is changing, sports are just changing" (from NFL.com).

Despite Charles' energy and optimism, the reality is that most fans, analysts, and team executives consider HBs in their late twenties to be liabilities. At first look, the numbers seem to corroborate this view. ESPN Stats and Information provides a discouraging analysis for the All-Pro Charles: 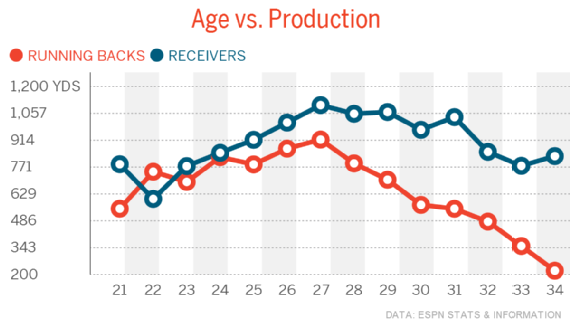 As the graph indicates, age 27 signals the beginning of the end for backs. Unlike wide receivers, who can remain productive into their thirties, HBs appear unable to maintain high rushing totals after years of physical abuse inside the lines.

The data is not quite so simple, however. First, age is not the best measure of the toll taken on a running back's body. What age tries to represent is total number of attempts (i.e. the number of times a back actually experiences physical contact when he plays). Therefore, a more informative analysis would provide the peak of production versus number of attempts. These numbers turn out to be good news for Charles. 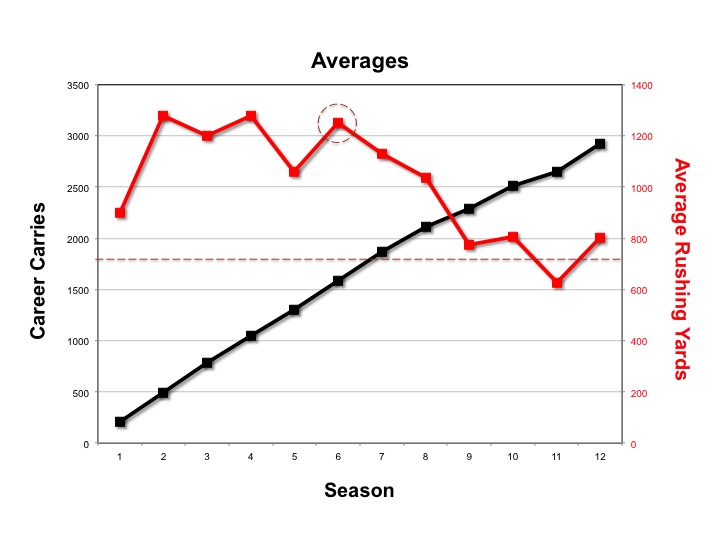 As the graph from numberfire.com shows, running back performance does not reliably drop off until 1,800 carries. As numberfire points out, this metric explains the mysterious collapse of Shaun Alexander, who rushed for almost 2,000 yards in 2005 and then never again hit 1,000. Interestingly, Matt Forte and Chris Johnson, members of Charles' draft class, have just climbed over 1,800 carries. Luckily for Charles, by the 1,800-carry standard, he could still have a couple of highly successful seasons. He only has 1,349 attempts, including those from playoff games.

Ultimately, these numbers are not perfectly predicative. In 2013, Adrian Peterson, starting the season at age 28 and just under 1,800 carries, played in 14 games and rushed for nearly 1,300 yards. Nobody can definitively say who is done and who is not. But, if there is a year left where Jamaal Charles' yoga and nutrition pay off, it will likely be 2015.