Big plays on the big stage

The NFL’s annual defensive player of the year honor typically is awarded to someone who leads the league in a conspicuous category, such as interceptions or sacks. For 2013, though, the award could well go to a guy who isn’t among the NFL leaders in anything but the most subjective statistic possible, total tackles.

Certainly, in Sunday’s victory over the New Orleans Saints, middle linebacker Luke Kuechly of the Carolina Panthers established himself as one of the favorites for the award, with a mind-blowing 24 tackles. There were some other notable standout performances on Sunday that elevated St. Louis defensive end Robert Quinn and Seattle cornerback Richard Sherman – the former posted three sacks for the third time this season and the latter registered two interceptions for a second consecutive week – into the elite subset of contenders.

But for anyone who watched Kuechly in an upset win that catapulted the surging Panthers into the lead in the NFC South, it’s hard to ignore what the second-year linebacker accomplished against the Saints’ high-octane offense. “People will say, like, ‘Well the guy was all over the field, right?’ But (Kuechly) really was everywhere you looked. It was like he was making every play,” acknowledged fellow Carolina linebacker Thomas Davis after the victory.

Actually, Davis, the strongside linebacker who is a pretty good story himself, having persevered through three ACL surgeries in his career, offered a strong supporting cast, seemingly making every tackle that Kuechly didn’t. On most days, Davis’ game, 13 tackles and an interception, would be a red-letter day.

But Kuechly somehow trumped him with 24 tackles and an interception.

The 24 tackles, according to the NFL, were the most in six seasons, since New York Jets inside linebacker David Harris also had 24 against Washington in November of 2007. It raised Kuechly’s total for the season to 146 tackles, third most in the league by the NFL’s count. Because every franchise employs different standards for doling out tackles, the statistic still isn’t recognized as official. But it’s hard to dicker with Kuechly’s tackle total for Sunday, and probably for the rest of the season as well.

Said New Orleans quarterback Drew Brees after the Saints’ latest road failure that could keep the team from having a playoff game in a Superdome setting where the club is all but invincible: “He’s smart and quick, more athletic than you think, and he’s got great instincts. You can tell he studies the game like crazy.” 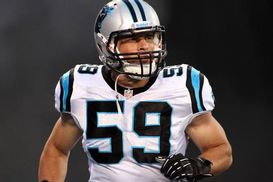 Through 16 weeks, Kuechly currently ranks third in the NFL in tackles, with 146.

Indeed, there were times on Sunday when it seemed that Kuechly, and Davis, for that matter, must have had the Saints’ huddle bugged. The two all but shut down New Orleans’ extensive screen game, sometimes simply jumping the receiver in the backfield, on other occasions chasing the play down. Davis outfoxed Brees on his interception, aligning in a three-point stance as a rush end, then dropping off into coverage. On Kuchley’s pick, he blanketed Jimmy Graham on a short seam route, then ducked under the tight end and burst to the ball for the interception.

“I definitely had a lot of help,” Kuechly said modestly. “(Davis) played great; the entire (defense) was on its game.”

For two seasons, though, Kuechly, the former Boston College standout chosen by the Panthers with the ninth overall pick in the 2012 draft, has been at the top of his game. And it’s put him, arguably at least, at the top of the middle linebacker group for the entire league. Kuechly claimed the NFL’s defensive rookie of the year award for 2012.

Just a year later, he’s gunning for a bigger honor.

Even after a terrific college career and a combine performance that included a 4.58-second 40-yard dash and 38-inch vertical jump, some observers did a double-take when the Panthers tabbed Kuechly with their first-round pick in ’12. Carolina already had multiple-Pro Bowl middle linebacker Jon Beason, and there was some question about whether Kuechly could play at the weakside spot. Coach Ron Rivera, a former NFL linebacker himself, actually began the season with Beason in the middle and Kuechly on the outside. But after Beason sustained the latest in a recent string of debilitating injuries, Kuechly went to the middle, and Rivera announced he would stay there for the long-term.

All Kuechly did as a rookie was lead the league in total tackles, with 164. He also added a sack, two interceptions, eight passes defensed and three fumble recoveries. This year, the Panthers traded Beason to the New York Giants and Kuechly, despite his youth, assumed the role of defensive leader. Beyond his 146 tackles, he has a pair of sacks, seven passes defensed and four interceptions.

The Panthers, who now follow Kuechly’s lead, feel he’s the consummate middle linebacker in a league where the 4-3 position has been somewhat diminished. “He might be the best (defensive player) in the league at any position,” Mitchell said.

There are several other players worthy of mention in the debate over who might be the defensive player of the year. Quinn has enjoyed a breakout campaign. Sherman and his Seattle secondary mate, free safety Earl Thomas, have both been superb. Indianapolis linebacker Robert Mathis has had a career year. Lavonte David, the young Tampa Bay linebacker, has been tremendous.

But on a big stage Sunday, in a huge showdown game seen by much of the country, Kuechly was special. And he’s been that way most of the season.