Before the NFL decides to bolt the door and put the chain on, it might want to consider the kind of freedom it is about to offer close to 2,000 professional football players.

In a lockout scenario, the league would be taking away player benefits, but also offering choices players never were allowed to make before.

One of the hidden factors in a lockout will be that players are no longer bound by the rules that are stipulated in every NFL contract. That means Vikings defensive end Ray Edwards and Ravens safety Tom Zbikowski can box. In fact, Zbikowski already is on a Vegas card March 12. Edwards says he is planning on making his ring debut in April. 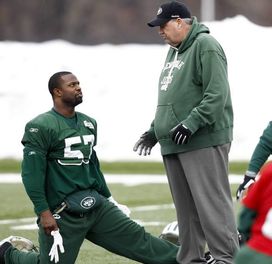 If there is no CBA, Rex Ryan won't be able to talk Bart Scott out of anything.

Jets linebacker Bart Scott already has appeared as a pro wrestling bodyguard on TNA iMPACT! More inverted atomic drops could be coming soon. Bills linebacker Shawne Merriman recently had a publicized feud with pro wrestlers after he allegedly tried to hit on their “divas.” A prelude to a televised chair over the head, perhaps?

Under normal circumstances, most coaches never would stand for their players participating in potentially dangerous sports outside of football. That’s why Zbikowski hasn’t fought since he was at Notre Dame.

These are not normal circumstances.

Next thing you know, Ben Roethlisberger will be riding a motorcycle again. Clay Matthews will be body surfing. Terrell Owens will be skydiving. Chris Johnson will be drag car racing.

Here is another factor. Players can’t be disciplined by the league for anything they do. That means we could see a spike in NFL players behaving badly. League punishments are a detriment to boorish behavior. Without fear of workplace repercussion, it could be an ugly few months.

Players with weight problems will have no motivation to eat right and work out. One NFL head coach told me he is resigned to the fact that he expects some of his big boys to come back from a lockout bigger than ever.

NFL players need rules. Strict rules. It may not be a big deal that Zbikowski is boxing. In fact, boxing probably will be good for him and for the league. Boxing can keep Zbikowski in top shape and keep the NFL in the spotlight.

But it will be a big deal if players start getting arrested at a record rate, or if they incur injuries during risky activities, or if they aren’t ready for football when the labor war ends.

The fear of players having too much freedom is not going to make the league softer in negotiations with the NFL Players Association. But it should give Roger Goodell and the 32 team owners a little something to think about.