Mics on centers are being unplugged

If you enjoyed hearing quarterbacks' signals in Week 1 television broadcasts, you were not alone.

Coaches of opposing teams also enjoyed hearing those signals. They went over the broadcast tapes and tried to learn as much as they could.

Prior to the start of the season, NFL teams were told that it was a requirement that their centers would be mic'd up in select national television games. A technician from NFL Films would attach one microphone to the front of the center’s should pads, and one to the rear of the shoulder pads. The mics, which were encrypted by the league with a system similar to the coach-to-quarterback communication system, would be turned on as the centers approached the line, and turned off after the initial crash following the snap.

But two weeks later, the “Field Audio Microphone Program,” as it has been called in league memos, has been unplugged.

In the first week, centers in six games were supposed to be wearing microphones. Among the games were Packers-Eagles, Panthers-Giants, Patriots-Bengals and Ravens-Jets.

A source said Patriots center Dan Koppen took off his microphones. And Ravens center Matt Birk refused to wear them.

In Week 2, the centers for only one game agreed to be mic'd.

In Week 3, not a single center has agreed to be mic'd. 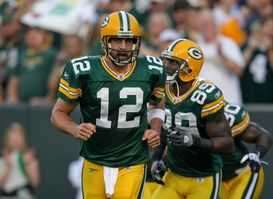 ICONQuarterbacks like Aaron Rodgers won't have to be as concerned about opponents listening to audible calls now that centers are no longer being mic'd up.

Centers have been feeling pressure not to wear mics from two sources: their coaches and the NFL Players Association. Sources said the NFLPA is upset with the television networks, and this is retribution. They believe TV is funding a potential player lockout in 2011 because even if there are no games the league still will be paid by the networks. So the NFLPA is telling players they don’t have to cooperate with Fox, CBS, NBC and ESPN.

The mini-insurrection forced the league to back off.

We haven’t heard the last of quarterbacks’ signals on broadcasts however. The league’s short-term solution, starting this week, is the mics will go back to the umpires. In past years, umpires had worn microphones. But with the umpires moving from in front of the line of scrimmage to behind the offense, it no longer made sense for them to be mic'd.

Now, the microphones will only be is use in the last two minutes of the first half, the last five minutes of the game and whenever a team is inside the 5. In those circumstances, the umpires move back to the defensive side of the line of scrimmage, and their microphones will be able to pick up sound from the quarterbacks. It won’t be ideal, but it will be better than nothing.

And moving forward, the league will likely demand that centers and coaches cooperate in the future by making this a collective bargaining issue. If the Field Audio Microphone Program is part of the CBA, the league will have the muscle to fine players and/or teams who don’t cooperate. As it stands, no one is being fined now.

Coaches won’t like it. But the networks will love it. As will fans. And no one will have a choice.

This is not an issue the league appears willing to back down on very easily. The NFL’s competition committee did not have a say in centers being mic'd. Members were told it was a broadcast issue. “There are certain interests on one side that don’t understand the ramifications on the football side,” one coach said.

One NFL head coach told the National Football Post his team changed all of its signals after his center was mic'd. How much a team could be helped by hearing a QB’s signals is debatable, but coaches are desperate for any edge they can get. “There’s not much information gained that way,” the coach said. “You don’t know what’s live and what’s dummy. But if you play a division team over and over again, maybe you can get some information over time.”