As recently as a year ago, the competition committee kicked around the idea of a bigger field, CFL style. And this wasn’t the first time the committee has broached the subject. Perhaps the committee will broach the subject again when it meets in Indianapolis in advance of the combine.

The Canadian field is 195 feet wide, compared to the 160 foot wide NFL field. The CFL field also is 30 yards longer, but the widening of the field is what really could impact safety regarding head injuries.

“I’m not so sure we shouldn’t think about widening the field,” former competition committee member Bill Polian said. “It’s a radical idea, but I think it’s worth thinking about. You would have more space and perhaps a safer game. I say that based on my CFL experience. There are less collisions of that type in the Canadian game.”

Polian knows the CFL better than most, having built Grey Cup winners in Montreal and Winnipeg before becoming a six time executive of the year winner in the NFL.

The thinking is a wider field would spread out bodies over more space, reducing hits in the middle of the field. The down the field game wouldn’t change much, but box play could be considerably different. 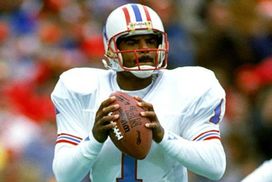 Warren Moon understands the differences between the NFL field and the CFL field.

Pro Football hall of fame quarterback Warren Moon, who played in the CFL for six years before coming to the NFL, said there are fewer head to head collisions by big men in the CFL—and that is significant to him. “The lower impact hits I think cause more problems over a period of time because there are more of them,” he said. “A wide receiver doesn’t get the number of hits a linebacker or lineman gets on a day to day basis. Those hits accumulate over time and probably do more damage than a big hit a receiver might get a few times a season.”

It’s possible a wider field would lead to more high impact hits, because defenders could be farther from their targets and building more speed before making contact. There would more “run and hit” potential, in the estimation of two general managers who spoke with NFP.

“If you widen the field, you have more high speed collisions,” said Rick Smith of the Texans.

But Polian doesn’t see it that way. “The farther a player has to run in terms of contact, the less ferocious the contact is going to be,” Polian said. “We know the most ferocious hits come from guys who are ten yards apart and lay each other out. You have fewer higher power collisions in the Canadian League than here.”

A wider field almost certainly would lead to more scoring, and a shift in the offensive-defensive balance of the NFL. Schemes would be affected. This might not be a bad thing for the NFL. But it would be a radical thing, to use Polian’s word.

“It would be hard for defenses to stop the offenses,” Moon said. “They are having a hard time stopping them now. It would be harder with a bigger field. There would be a lot more scoring, I know that. If you make the field bigger, bigger lanes, bigger areas, it will be tougher for those defensive backs to cover.”

Some believe NFL players have outgrown their field, which is part of the problem with head injuries. CFL-sized fields also may encourage faster, more athletic, and smaller players because covering ground would become a more valued asset.

A potential problem with wider fields is some stadiums might not be able to easily accommodate them. It depends how much the field would be widened. Polian believes extending the field to the white border would not be a problem anywhere.

A less drastic measure could be to widen the hash marks as they are in college fields. The competition committee has discussed this as well. But the affect may be minimal.

These ideas may have merit. They may not. But they are worth further investigation in the quest to make the world’s greatest game a safer one.

It would be nice if NFL Europe still was in existence and the league could experiment. But there are other ways to measure how field size affects impact. The NFL quietly is studying Aussie Rules Football currently, as players in that league are wearing GPS devices that measure speed and impact. Perhaps similar studies need to be done on CFL players and NFL players. 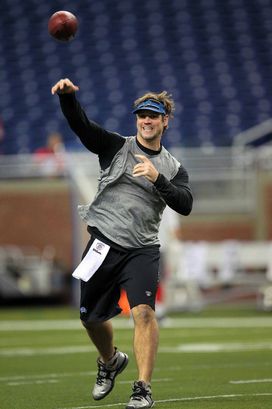 *There are some rumblings that Colts backup quarterback Drew Stanton may follow Bruce Arians out west to Arizona. Arians was impressed with how Stanton performed in preseason and practiced all season with the Colts, and he needs a quarterback. The fact that Stanton knows Arians’ offense and fits in it gives Stanton an edge. Stanton is likely to have multiple suitors, but the Cardinals’ opportunity might be the most intriguing for him because it could be his best chance to be a starter.

*The Falcons look to be in the running back market this offseason, according to those who know. Chances are the team will cut ties with 30-year old Michael Turner and look for a younger runner. Turner provides toughness, a solid locker room presence and power on downhill runs, but scouts say his ability to bounce and cut isn’t what it was.

My Sunday Best: CFL to NFL

Importing from the Canadian League isn’t anything new for the NFL. The NFL has imported plenty of CFL players through the years, quite a few of whom have gone on to fine NFL careers. Here are my Sunday Best players who went from the CFL to the NFL.

Brendon Ayanbadejo—He played for the Blue Bombers, Argonauts and B.C. Lions before hooking on with the Dolphins in 2003. The Ravens linebacker has played ten NFL seasons and is with his third NFL team. He is a three-time Pro Bowler as a special teamer.

Brandon Browner—He was a three time CFL all star with the Stampeders before the Seahawks took a chance on the 6-4 cornerback. He made the Pro Bowl in his first NFL season last year and was playing well this year before he was suspended for violating the performance enhancing policy.

Mervyn Fernandez—After being cut by the Raiders, “Swervin’ Mervin” was the CFL’s Most Outstanding Player and a Grey Cup winner in 1985 for the B.C. Lions. The wide receiver returned to the Raiders in 1987 and averaged 18 yards per catch over six NFL seasons.

Doug Flutie figured out how to play pro ball north of the border.

Doug Flutie—Judged too small to play in the NFL after stints with the Bears and Patriots, he became a CFL legend with three Grey Cup MVP awards, six CFL Outstanding Player Awards and a number of records. Then he returned to the NFL and had some moments with the Bills and Patriots. He even played in the Pro Bowl in 1998.

Jerrell Freeman—After failing to make the Titans, Freeman played three seasons with the Roughriders. He caught the attention of the Colts and other NFL teams when he led the CFL in tackles in 2011. On his fourth NFL snap, the inside linebacker returned an interceptio n for a touchdown. Freeman ended up leading the Colts in tackles and finishing fifth in the league in tackles as an NFL rookie.

Jeff Garcia—He went from Flutie’s backup with the Stampeders to a highly productive passer and Grey Cup winner in the CFL before going on to the 49ers. In San Fran he started out as Steve Young’s backup and ended up a four time Pro Bowler. He played for seven NFL teams.

Cookie Gilchrist—He had a distinguished CFL career in which he played for six years and was part of a Grey Cup winner with the Tiger Cats in 1957. He jumped to the Bills of the AFL in 1962 and became the league’s first 1,000 yard rusher and a four time AFL all star.

Joe Horn—After two CFL seasons, he went to the Chiefs and then the Saints. He became the most productive receiver in Saints history.

Rocket Ismail—He signed with the Argos for $18.2 million, won a Grey Cup and then jumped to the Raiders a year later. He also played for the Panthers and Cowboys. He had a couple of 1,000-yard receiving seasons in the NFL but never lived up to the hype.

Joe Kapp—He was the only player traded from the CFL to the NFL, going from the B.C. Lions to the Vikings in 1967. The quarterback won a Grey Cup in 1967, and then started on the Vikings’ Super Bowl team that lost to the Chiefs two years later.

Warren Moon—Undrafted by the NFL because he refused to switch from quarterback to tight end, Moon led the Eskimos to five straight Grey Cup victories before joining the Houston Oilers in 1984. He made nine Pro Bowls and threw for more than 70,000 yards between both leagues.

Jon Ryan—The Canadian native punted two years for the Blue Bombers before migrating to the Packers and eventually the Seahawks.

Joe Theismann—He led the Argonauts to the Grey Cup Final in 1971, then went to the Redskins in 1974. He led the Redskins to a Super Bowl victory and won the NFL MVP in 1983.

Cameron Wake—The Giants regret the day they cut him. He had 39 sacks in two years and was a two-time Canadian defensive player of the year before he was pursued by 17 NFL teams. Wake became an instant success in Miami and is a two-time NFL Pro Bowler 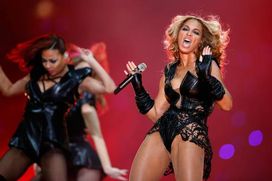 *I can’t tell you whether or not it will be too cold in New Jersey for a Super Bowl halftime show. tell you if there is one, the performer will be wearing more than Beyonce wore in New Orleans.

*Deer antler spray? If true, perhaps we should banish Ray Lewis from all things football for life. Great perspective here from the gifted Dan LeBetard.

*Erecting a statue of Ray Lewis is a great idea. But some would say there already was a statue of Lewis on the field during the Super Bowl.

*It might be a good idea for Joe Flacco to go to his first Pro Bowl before he becomes the highest paid player in the NFL.

*Turns out Flacco would have been the perfect quarterback for Woody Hayes.

*Aaron Rodgers is someone kids can look up to--and not just because of how he throws the football.