Ryan Tannehill could end up being an outstanding NFL player. But he is going to be chosen ahead of a lot of players who are much better draft prospects.

About one month ago, Tannehill wasn’t even the consensus third best quarterback in the draft. It was between him, Brandon Weeden and Kirk Cousins.

What happened in the past month? Peyton Manning landed in Denver. The Redskins acquired the second pick in the draft so they can select RGIII. Matt Flynn chose Seattle. Alex Smith stayed put. The Jets traded for Tim Tebow.

And the teams that were in the market for a quarterback but didn’t get one, especially the Dolphins, Browns and Chiefs, might have become more desperate. So Tannehill now looks like a lock to be a top ten pick, and a possibility to be a top five pick.

But his stock spike was manufactured by one thing: quarterback desperation.

“Because the position has such a high value and because there is such a need to have a quarterback who is consistent and stable, people are reaching,” one general manager said.

Said a personnel director: “No one can tell you he’s a sure thing. But people don’t stick to their grades at the quarterback position.”

If people did stick to their grades, Tannehill would be a mid-second round pick, based on the eight personnel men I polled on Tannehill. None of them said they would choose Tannehill in the first round. 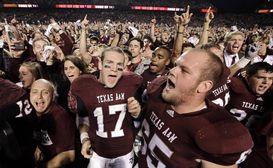 Tannehill's stock is sky high because of the quarterback vacuum.

There are some intoxicating qualities about Tannehill. He has the right mental makeup to be an NFL quarterback. He has excellent size and athleticism. His pro day was impressive. He can spin it. He can move. “He has first round skills,” the general manager said. A second general manager went so far as to say Tannehill’s traits may be better than Andrew Luck’s.

But it takes more than traits to make a prospect. The GM also said Tannehill does not have Luck’s feel for the game. A personnel director questioned Tannehill’s decision making. Others pointed out that he had repeated chances to lead the Aggies to comeback victories, but wasn’t able to. His record as a starter last season was 7-6. Against Texas, which was arguably his most important game, he threw three picks and completed 41 percent of his passes in a tough loss.

The real issue with Tannehill is it’s difficult to evaluate him because he has a limited body of work. Whereas Luck has 38 college starts, Tannehill has 19 at quarterback. He spent two plus years playing wide receiver. He is relatively inexperienced and probably not ready to start, scouts say, but if he’s chosen in the top ten he likely will be pushed onto the field anyway.

“Can he come in and play at a championship level?” the first general manager said. “When you start talking about a top five pick, that’s what you are trying to say. I don’t see that in him. He is still young in the quarterback position in terms of the reps and starts.”

Really, the best chance for Tannehill to succeed and reach his potential is for him to be chosen where he should be chosen, in the second round. He is a quarterback who needs to be developed. If he goes as high as it appears he will go, he will be faced with unreasonable expectations and pressure to produce too quickly.

Ultimately, Tannehill’s meteoric rise probably will not work out well for the team that drafts him, or for Tannehill. 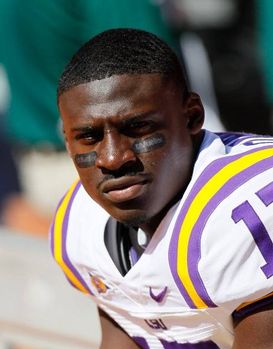 Wonderlic scores can be deceiving for people like Claiborne.

*Morris Claiborne’s reported Wonderlic score of 4 didn’t shed light on Claiborne’s intelligence as much as it shed light on his learning disability. Claiborne, according to NFL front office men who have done their homework, has trouble reading. At Louisiana State, the cornerback was given extra time for tests. The consensus is Claiborne has enough football smarts and instinct to play at a high level in the NFL for a long time. Cornerbacks don’t have to be Einsteins in the large majority of NFL schemes, and many are not. Claiborne’s coaches will have to make allowances for him, however. Claiborne can’t be expected to learn through a playbook, rather, he will learn best from walk throughs. The only issue is whether or not that will impact the other cornerbacks on his team. But multiple personnel men have said Claiborne is a great, unspoiled, engaging kid who they would like on their team.

*West Virginia’s Bruce Irvin may be heating up in the draft to the point he could creep into the first round. He is scheduled to take 12 visits to NFL teams. He is appealing both the 3-4 teams as an outside linebacker and 4-3 teams as a defensive end. Among the teams he is visiting are the Bears, Browns, Chiefs, Dolphins, Forty Niners, Jets, Panthers, Patriots, Texans and Titans. Part of the reason so many want to see him is coaches want to put him on the board and watch tape with him, and have a chance to see what makes him tick.