5 reasons NOT to go to the Super Bowl

If you are a Ravens or a Niners fans and it’s killing you not to be in New Orleans this week, don’t worry, you may not be missing out. The last time I was in New Orleans was for Super Bowl XXXI in 1997 when the Packers played the Patriots. I had clients Packers RT Earl Dotson, RG Todd Rucci and another Pats player. Although I was dialed into all the festivities with friends, there were still many issues to overcome as there is for any Super Bowl in any city.

The game is designed for TV: It was the mid-way through the third quarter when I literally fell asleep. It was during one of those long TV timeouts that seem to have lasted forever. I think I was out for five minutes. When I woke myself up with one of those (feel like your falling) self-induced body jerks, next to one of my clients’ mother, I was prepared to be embarrassed. However, she, along with significant others, were out cold. The stops and starts with added breaks in play makes the experience downright boring. As much as you love your team, it’s not worth the mega bucks you would spend for a ticket. The commercials you see at home at least keep you entertained while allowing use of your own bathroom.

Be prepared to be gouged: Whether it’s a hotel room, a meal, a drink, a ticket or whatever you buy, be prepared to pay a huge premium. Most blue-collar fans have to usually stay 30 or more miles outside the city to find an affordable room. Rooms usually go for $400 up to $4,000 per night with a three or four night minimum. Oh, and good luck finding parking when you get into the city. If you don’t care about money and have plenty of it you might be able buy your way into a fun experience.

Watch your back and check those tickets: On my first night in New Orleans I was walking down gritty but festive Bourbon Street when I felt something in my back pocket. I thought it was one of my friends messing with me. I snapped my right hand back to catch a teenage pickpocket with his hand on my wallet. I literally caught him “red handed”. He didn’t run, smiled, gave me a disarming look in the eye and says, “ You caught me working, welcome to New Orleans”. All the scammers are in full swing. Counterfeit tickets to the game and all major events are everywhere. Although safe, you have to be on alert.

Expectations not met: I’ve been to the best parties the Super Bowl has to offer: The Maxim party, the Playboy party, the Commissioner’s party and many others. I have to say that most of them are over-crowded and overrated. I took some friends to the Commissioner’s party in Miami two years ago. We were staying in South Beach and it took us an hour and half to drive 30 miles to the party. This used to be the crowning event of all parties where the top of the food chain (owners, GMs, head Coaches, corporate VPs and entertainers) would meet, mix, mingle, and dance. They still do but now there are two levels to this party. The super VIP area where the real action happens. And, there is the nice but somewhat boring main party where you can eat and drink for free. We stayed 30 minutes and left.

Even Snoop Dog and the chic and sexy Delano Hotel let us down. My buddy bought a $2,500. table (it actually turned out to be a half of table the size of pizza) to see him perform there. The show was supposed start at 11:30 pm but Snoop didn’t come on until after 1:00 am, sang 4 songs and left. The venue was so crowded you could barely move. Welcome to the Super Bowl. Many clubs pay a headliner to “stop by” and leverage their name to get people in the door. Rarely do they produce the experience they advertised. 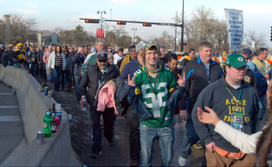 If you're heading to the big game, be prepared to stand in long lines and large crowds.

Logistics and traffic: If you can get a ticket at face value and get a room in town, not have to drive, and have a plan, the Super Bowl can be a fun experience. From a value standpoint it’s a rare occasion when the typical fan can say they got their money’s worth (just ask those who went to Dallas last year). However, the arteries into any Super Bowl city are usually at a stand still from Thursday until Sunday. If you are staying outside the city be prepared to spend a lot of time in your car. When staying in the heart of New Orleans the experience can be good. But most other Super Bowl sites are a logistical nightmare with the pre game events spread all over a large area. At least New Orleans offers a concentrated locale.

So if your team is in New Orleans right now don't feel like you are missing out. Take the money you would have spent on a ticket and airfare and use it to have a big party or reserve a table at your favorite bar to watch the made for TV spectacular.