A 1-in-6 chance for John Randle

In 1989, I aggressively solicited sack specialist John Randle to become his agent. He eventually broke the news to me that “blood is thicker than water” and he would be going with the agency that represented his brother, Casterline and Vines out of Dallas. John was straight up, direct and engaging throughout the process, and I enjoyed getting to know him. It killed me not to get him. As did anybody else who watched him shred apart the Lone Star Conference, I knew he was special. 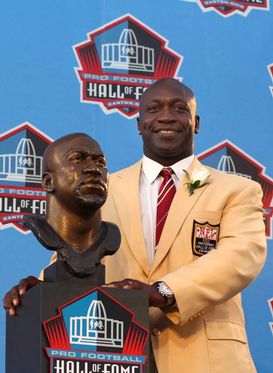 ICONDespite being passed over in the NFL Draft, John Randle was honored in Canton last weekend.

By now you probably know the story: twelve rounds went by in the 1990 draft and 28 teams passed on John. However, there were six teams that wanted to sign him as an undrafted free agent, five of which wanted to make a linebacker out of the 6’1”, 255-pound Division II pass rushing end.

When the offers came in, the logical move was to send him to Tampa on a “tryout” basis. The drill was to let him work a minicamp the weekend after the draft and let the coaches decide if he was a good fit. It was my understanding that the Bucs scouting department, led then by Jerry Angelo, brought him in as a pass rusher but the coaches didn’t see the fit. Although the Bucs were still willing to sign John, his brother didn’t feel good about the chances of John making the team as a linebacker who struggled during the try out. In addition, Phil Kruger, the Bucs GM at the time, told the agents that he would sign him but honestly didn’t see him making their club.

In the mean time, a few teams were still pestering the agents to sign John. However, the Vikings had a different pitch than the others. According to his agent at the time, Scott Casterline, the Vikings’ plan was to “get John on the line somewhere, just pin his ears back and let him get after the QB and into the backfield.” They told Scott and Vic that their goal was to find a position that would play to his skill set. They backed up their pitch by pointing towards the success of their undersized DE Chris Doleman, who record 21 sacks in 1989 after being moved from a 3-4 OLB to a 4-3 DE.

The agents wisely decided to send John to the land of 10,000 lakes, and the rest, as they say, is history.
John’s story is a good example of how important an agent’s decision-making role can be in the player’s career. If the agents thought John had to make it as a linebacker, he most likely would have never made it in the NFL or to the Hall of Fame.

I felt proud watching John get inducted last weekend as he joined Darrell Green and deceased union leader Gene Upshaw as the 3rd Javelina in the Hall of Fame. But I’m still pissed I didn’t get him.